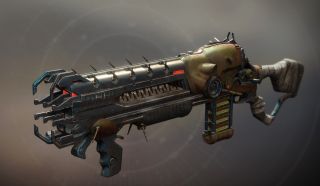 The rabble around Destiny 2's Lord of Wolves Exotic shotgun has died down, but the gun hasn't gotten any less broken in PvP. However, its nerf, which was originally scheduled for July, will now be released in August - after the next Iron Banner Crucible event - Bungie announced.

Bungie didn't specify exactly what the nerf is or when it will be released, but it will get here before the August Iron Banner. This month's Iron Banner week starts on Tuesday, July 23 and runs through Tuesday, July 30, so the nerf will likely arrive in the first or second week of August. In the meantime, gear up for another howling Iron Banner grind.

Lord of Wolves won't be the only returning problem this Iron Banner, either. The infamously overlong Iron Banner quest Test of Strength is also coming back, and while Bungie says it "did get some feedback on this quest and have some changes lined up," they won't be ready in time for this month's event.

As to why the Lord of Wolves nerf has taken several weeks to prepare and deploy, Destiny franchise director Luke Smith previously said that it was a matter of work-life balance. "We could take the patch off the patch factory, more or less, and ask a bunch of people to work super long and add this thing in," he said during a GuardianCon charity livestream in June. "And we're having the conversation about is it worth doing that or is it better to preserve the work-life balance and ship it later in July? That's the 100% God-honest truth. We don't know, but it's always a cost-benefit analysis for people who are working super hard. Taking something out of a release candidate [patch] is something we don't like to do very often."

With Destiny 2: Shadowkeep just two months away, I imagine Bungie's got all hands on deck readying the expansion, and it's reasonable to suspect the delay to the Iron Banner quest changes is also (at least partly) a function of this. I have to admit I'm not looking forward to another Iron Banner without these fixes, but I also wouldn't ask anyone to work overtime to fix it. There's always next month to get this season's armor.

Here's everything you need to know about the San Diego Comic Con 2019 schedule.