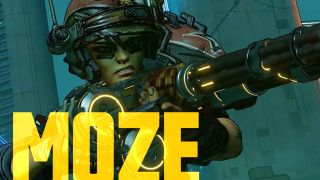 Like many, I've been on the fence about which Vault Hunter to play in Borderlands 3, but for months I was certain it wouldn't be Moze. That said, after seeing her new character trailer and reading up on some of her skills, I'm more torn than ever, because it turns out Moze is freakin' sweet.

Moze's character trailer explores her history with the military and, more importantly, with the Iron Bear mech, Moze's partner in destruction. Moze acquired Iron Bear after her squadron was wiped out in a botched operation, and it's since become her best buddy. Moze maintains Iron Bear like an old car, and Iron Bear watches for enemies while Moze sleeps. It actually seems like a cool pseudo-symbiotic relationship reminiscent of old mecha anime like Evangelion and Eureka Seven, which is more touching than I expected.

Iron Bear is still a big-old deathbot, mind you, and as Gearbox explained in a blog post accompanying today's trailer, it's a central part of Moze's abilities. Borderlands 3's Vault Hunters are all different takes on the term one-man army, and Moze presents a very literal interpretation. She can equip one action skill to each of Iron Bear's arms, meaning she can use two of the same one or any combination of the six available to her. Each of Moze's three skill branches contains two action skill variants and some augments for each, so there seems to be a lot of room for customization. In all, her action skills include:

Those are just Moze's action skills; we haven't even gotten to her passive abilities. Fortunately, Gearbox shared nine other abilities in today's reveal:

Watch the character trailer for Zane the Operative here.