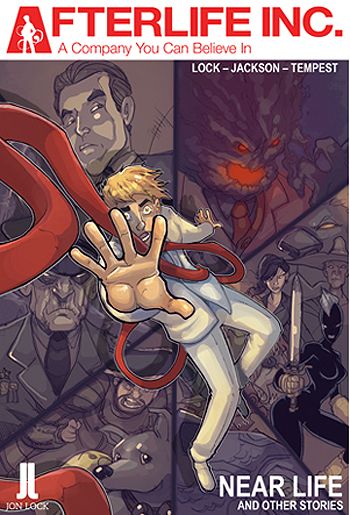 Near Life and Other Stories

The huge ideas come thick and fast in “Near Life”, and it’s the closest the series has got to a full-on action thriller. The central conceit is horrifying and the story seems to not only introduce a long-term nemesis but hints that much worse is to come. It’s about as fantastical as it’s possible to be, after all where else would you see a Kaiju-style battle between a Guardian Angel and the focussed will of a psychopath in Heaven? However, the script, and Ash Jackson’s excellent art keeps it grounded and where needed, nasty. The final pages show Jack Fortune isn’t playing around anymore and it’ll be interesting to see what the consequences of his actions are.

“Dead Days”, the section that follows it, explores individual characters again, this time focussing on Jack’s staff. “Lux”, illustrated by Jade Sarson picks up on an apparently throwaway incident from the previous book and shows just how seriously the Head Of Security is taking it whilst “Nuriel”, illustrated by Mark Pearce pits the colossal Angel against the one thing he’s never faced before; a customer survey.

Meanwhile “Anhael” follows the last surviving Archangel from The Calamity (the incident that led to Jack taking over the Empyrean) and his work tending the land. If Lux is a soldier and Nuriel a loyal bodyguard then Anhael is a mildly frustrated artist and this story, with stunning art by Warwick Fraser-Coombe lets the Archangel really show what he can do.

“Temperance” introduces us to another major player, Temperance Jones, who is both a demon and the head of the Union. He and his brother play poker, discuss the takeover and how they’re going to deal with it. It’s a neatly-handled story, the -poker game mirroring not only Temperance’s relationship with his brothers but Jack’s relationship with the people of the Empyrean and it’s illustrated in a rounded, friendly style by Grant Perkins and coloured by Nadine Ashworth.

“Elizabeth” focusses on the only other human on the board of Afterlife Inc, whose brutal honesty is matched only by her disappointment with the afterlife. The story follows Elizabeth as she’s dispatched to set up a night club in the desolate region of the Empyrean known as Zebul and finding both the afterlife’s cleaning lady and some perspective. Initially the darkest of the stories, it’s actually rather sweet, Jack showing his colleague the way things are in a manner she’ll understand and accept as positive, albeit through a very odd lens. Jack Davies’ dynamic, slightly stylised art works perfectly the piece too, focussing on character and expression as well as moments of huge scale.

“Ochroid”, the unflappable right hand of Jack Fortune is next, in a story which does go flat out dark. Ash Jackson’s pencils and Nadine Ashworth’s colours combine to tell a story about the last version of the Afterlife, the destroying angels left over from it and what happens when they wake up. The story paints Ochroid as Jack’s better half, a polite, calm man who wants to do the best for people and is deeply troubled when he can’t. It doesn’t end well, but it provides a fascinating insight into a normally quiet character.

Finally in “Dark Days”, we have “Jack” by Will Tempest, which gives us tantalising hints of the man Jack Fortune used to be and some idea of what his plan may be. The only story to date set outside the Empyrean, it’s a small, foreboding piece that I suspect will come back to haunt the entire cast before long.

The final third of the book opens with “The Wait”, illustrated by Sean McSorley. It’s one of those stories, like “Wonderland” in the previous book that only a series like this could really tell. A life ended in one of the cruellest ways imaginable leaving Max, a new husband, with unfinished business. So, he waits for his wife. That’s it, nothing fancy, nothing Earth-shattering. He waits for her because he wants to go on into the Empyrean with her and we see the world change around him. Parties happen, disasters occur, people change and grow and Max waits because he knows he doesn’t want to go into Heaven without his wife. It’s a beautifully understated, simple little story with some fascinating, almost Dave McKean-like montages by Sean McSorley and it reminded me of nothing more than the early episodes of The West Wing. There’s the same sense of “walk fast talk fast”; the same constant sense of something going on just off panel and most of all, the sense that Max is cared for, even respected by senior staff for what he’s doing. It’s a sweet, gentle little story and one of the book’s highlights.

“Laika”, opens with the revelation that Henry VIII has set up a fiefdom independent of the Empyrean and gets progressively more demented. This is very much a Jack and Mr Ochroid story and the combination of fast talking huckster and polite, slightly timid man of worms is a joy to behold, especially when paired with one of England’s (apparently) grumpiest Monarchs. The payoff is obvious in context but so completely, gloriously crazy it will make you smile anyway.

Finally, “Genesis” sets up what I suspect may be the next big arc of the book, with the embodiment of six of the seven days meeting to discuss Jack and Afterlife Inc. Jack Tempest’s artwork is suitably epic, changing scale constantly to match the God-like power of the main characters whilst the script folds itself neatly into almost every story we’ve seen up to now. The Days are not pleased about Jack, and soon, something will have to be done…

Afterlife Inc remains one of the most consistently imaginative, fun books on the market. Near Life and Other Stories not only builds on this but expands the book’s universe, showing us more of the Empyrean and the forces ranged against it, as well as more of the people (un)living there. It’s a fascinating, occasionally horrifying world and it’s well worth a second visit. Bring on volume three.