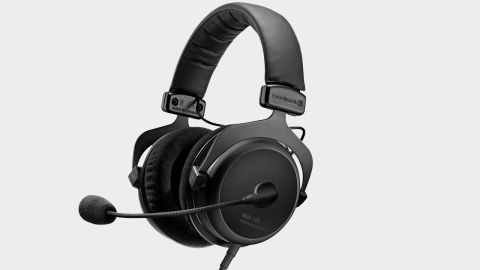 A sturdy gaming headset with excellent audio quality and a great mic, let down by poor design features, some discomfort, and a large pricetag.

Traditionally a studio headphone company, Beyerdynamic has dipped its toes into the world of gaming headsets via the Game Custom and this, the MMX 300, offering ‘recording studio quality’ audio in a pair of cans designed for games. That’s how it’s marketed, at least. Having spent a couple of weeks with the Beyerdynamic MMX 300, I can confirm that the audio it provides is excellent - if a little quiet - but the headset is far from perfect, with odd design decisions and build imperfections preventing it from truly justifying the eye-watering $350 / £280 price it commands.

In terms of design, the MMX 300 is a simple beast. It’s well built, and wonderfully sturdy, with a metal headband running between the earcups, padded by a soft leather covering. It’s fully adjustable across the top of the head, and there’s enough give in the stretch and bend generally for it to shape itself to your head, without it feeling flimsy or breakable. It’s a strong, brutish design, but tough as hell - the Brienne of Tarth of gaming headsets - and it’s nowhere near as pretty as the likes of the Steelseries Arctis 9X.

Padding around the earcups is supersoft microfibre and, when you first pop it on, feels luxurious on your ears. Sadly, after about 30 minutes, this headset gets uncomfortably hot, making it less than ideal for long gaming sessions. It doesn’t pinch your head, or create an ache around the ears - it’s just hot and gets your ears a little sweaty, and thus a bit uncomfortable.

The functional design doesn’t house that many features, and it’s here that the MMX 300 is most scant. The microphone is fixed, so you can’t really wear this out of the house as a normal pair of headphones (a kick in the teeth, if you consider the price, and audio capabilities it has). Sure, you can bend the wire upwards to remove the mic from your face if you’re playing offline, but it’s really designed to be sat by your mouth at all times. To be fair, the cartoid microphone is top quality, picking up voice incredibly clearly and broadcasting it remarkably well. If you’re an aspiring streamer and love talking to your audience, this headset will serve you incredibly well in that department, and the pop shield will ensure background noise is kept to an absolute minimum.

The cable that attaches to the left earcup and runs to the controller or console / TV is a nice, thick, long wire, with volume controls and mic mute options housed about a quarter of the way down in a small control box. These buttons work well, and the cable itself is unlikely to kink or break… but a genuine problem did rear its ugly head here. While testing the MMX 300 and the Game Custom we noticed problems with the connection between the 3.5mm cable and the earcup on the headset (and sometimes to devices / machines themselves). When I plugged this headset into my PS4 controller to test it with Assassin’s Creed Odyssey, it completely lost audio connection, until I jabbed the 3.5mm cable into the headset several times, and twisted it around to make it work. Normally, we’d attribute this as a fault of the review unit, but we also had the same issues with the Game Custom headset and a completely separate cable during tests. Not great.

When it comes to audio performance, especially in games, it’s tough to fault the MMX 300. First I tested it with Assassin’s Creed Odyssey on PS4, and it delivered fantastic audio, especially when picking up minor details in the world. You can actually hear the whooshing of arrows cutting through the air, and pinpoint where they’re being fired from. The crackle of fire, the sound of footsteps, and the lapping of waves is all authentic and rich. Dialogue loses a little bass during conversations, especially when chatting to some of the burly men competing in the Olympics, but it never sounds empty or hollow like it does on less well tuned headsets.

Sadly, though, everything is very quiet. While that does allow you to balance the audio better and pick out smaller sounds, I found that even with the volume turned right up on the headset and on the PS4, it lacked power, particularly in battle scenes and more stirring orchestral moments. The sound was still clear - it just didn’t feel epic. It’s really noticeable when you unplug the headset and continue playing via the TV speakers on a set with decent audio.

Next, I tried it with Apex Legends and the same strengths and weaknesses came through. Lovely, rich surround sound meant every small detail was picked up, but when it came to combat you never really got the feeling that everything was properly kicking off. It’s such a shame because everything else about the MMX 300’s audio is truly class-leading. Shadow of the Tomb Raider and Resident Evil 2 produced similar results.

Finally, I tested it with movies, TV and music. Here it performed extremely well: watching John Wick 2 was a delight, especially during the mid-movie fight in Rome. The headset handled the subtle shift between indoor and outdoor gunfire extremely well, all while blasting out the pulsing EDM track in the background. Similarly, it responded well to the action scenes in a few choice episodes of Game of Thrones, and did a great job picking up small audio details in The Chilling Adventures of Sabrina, balancing them brilliantly with the dialogue.

In terms of music, this headset is extremely versatile - a clear benefit of Beyerdynamic’s musical heritage, doubtless - and it did well with all types of music, from metal to classical to R’n’B. It particularly excelled with mid-range singer-songwriter tracks, as the bass was perhaps a little weaker than some other headsets we’ve tested (although barely).

Is it all worth the price of admission? I’d have to say no: this headset has far too many inconsistencies to be essential. While it does deliver some of the best in-game audio you’re likely to hear, and is well tuned for movies and music, the design doesn’t match the headset’s superior sound quality. For a whopping $350 / £280, you’d expect something you could easily wear outside the home, something with a sleeker look and detachable mic, and you’d hope that it came with some kind of cooling solution for the earcushions that allowed you to wear it for the lengthy gaming sessions it’s designed to facilitate. And you’d definitely want a cable that fitted better into the headset itself. There’s some amazing audio tech packed into the MMX 300 but this is several design decisions away from perfection.

A sturdy gaming headset with excellent audio quality and a great mic, let down by poor design features, some discomfort, and a large pricetag.