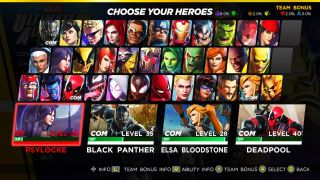 Call it Into the Spider-Verse recency bias, but one of the first characters I added to my team was Miles Morales, and I struggled to swap him out across the course of the game. In fact, most of the web slingers are very useful to have in your team for their mobility and power. Miles offers up a very different ability set to the rest of his web-slinging colleagues and a potent punch/kick combo. Miles can also leap in the air and pull his webs to send him hurtling into the ground with an AOE effect, and is incredibly nimble in battle, able to dodge with ease and hop around opponents at pace.

But he shines when it comes to his abilities, specifically the High Voltage Lines. With this attack Miles sprays the floor with electric webbing that deals damage over time for as long as the webs stick around. This limits enemy mobility and shocks them in place which, when combined with a big heavy bruiser (see the next entry) you can deal incredible damage, especially with a synergy attack that slams into the webbed up grunts. Surprise Strike is also very useful when you’re dealing with small groups full of high-power enemies, and Venom Strike is a massive AOE blast for when you get cornered. He’s an ace all-rounder and a wonderful early addition to the team.

HULK SMASH! Sorry about that, getting carried away again - for fun factor, you can’t get much better than The Hulk. He’s big, he’s tanky and he likes to smash things. When you’re figuring out a team in the early stages, you can’t really survive without a tanky character, and The Hulk is by far the best of them. Where Venom feels a bit wishy-washy and Drax too much of a specialist, The Hulk is your bread and butter meat machine that will batter grunts like nobody’s business.

Let’s talk abilities: Hulk Smash is naturally what you should max first, as it’s affordable, reliable, and devastating in groups, especially when synergized with something like Miles’ electric web attack. You want to pair the Hulk with anyone who can group enemies together or lock them down - he thrives when they lack mobility. Gamma Slam is another firm favourite - Brucey boy will pick up a grunt, swing them around and lamp the ground with him, causing a massive shockwave. It is disastrous for groups of enemies, and will almost always kill the enemy you pick up.

Wasp is a totally underrated hero in Marvel Ultimate Alliance 3. She zaps enemy with jolts of electricity, can fly around the battlefield and is a great support to more grounded brawlers and burly tanks. She offers an awesome mid-point between energy-bound mage characters and combat specialists. Her attacks are rapid and are good at stunning enemies. A perfect third position to complement a blunt damage-focused character and a tank.

Her abilities are where the magic happens though - Wasp Sting is like an upgraded version of Miles’ web-shooters, a rapid-fire attack that will stun foes into submission whilst the rest of your crew works on them. Big Surprise is also hilarious as you enlarge Fidget Spinners to crush groups of grunts. The pièce de résistance though is Tiny Tornado, an electric hurricane that whips up a storm, sending enemies into a frenzy that the rest of your team can easily capitalize on.

The merc with a mouth has made his way into Ultimate Alliance 3, and whilst he’s worth playing for the laughs alone, his quippy jibes and cheeky idle animations belie a truly devastating damage dealer. Laugh it up, but the fact that Deadpool mixes both nimble teleporting, excellent damage resistance AND ranged attacks with his arsenal makes him the perfect all-rounder, as he deals damage with pretty much every ability type.

He uses his swords for normal punches and kicks, but his abilities are where it gets interesting. Slice & Dice and Katanarama are straight forward attacks that close gaps and slice through enemies with ease but Eat Lead and Make it Rain are well worth investing all of your orbs into. Eat Lead is a rapid-fire attack, but with sub-machine guns that deal terrifying damage, especially when combined with another hero shooting from afar. Make it Rain, though, feels broken. Deadpool drops a number of timebombs at his feet that send his enemies flying into the sky. If you put some enhancements into your Energy tree, you can spam this in the midst of battle to clear out groups without being beaten out of the animation. Don't sleep on Deadpool!

Easily the most exciting new addition to the roster, I had no idea who Elsa Bloodstone was before playing and I leave enriched by her godly presence. Bloodstone isn’t the most famous Marvel character, but she’s one of the most inspired. If you’ve played Bayonetta, you’re going to love how she controls. A lot of her attacks involve shotgun blasts from afar, as well as persistent pistols that fill enemies full of holes. She’s not the most nimble character on the roster, but the damage she deals is no joke - with A grade damage modifiers on some of her skills, she is a force to be reckoned with, especially when upgraded. Appearing near the end of the game, I found her to be incredibly useful when dealing with the tanky bosses that rock up in the third act.

Speaking of skills, you’re going to want to focus on Double Barrel and Fully Stocked. Double Barrel does unbelievable damage, and you can keep clicking after the first set of shots. Fully Stocked does gigantic melee damage and then covers the affected enemies in bullets - its fantastic for crowd control. Bloodstone is a special hero too in that they can take on enemies from afar with ground attacks, which are usually reserved for pure melee. Worth an addition to your team if you want some versatility.

Peter Parker has always been a useful pickup across the Marvel Ultimate Alliance games, and in the third entry, this is no different. I found it difficult to replace him for several reasons, the first being that you unlock him right at the start and once levelled up he is dangerously powerful. As well as offering relatively high HP and resilience for such a nimble character, Spidey has a set of fantastic diverse abilities that work around a team.

Whilst Spider-Drone is fairly useless (avoid spending your upgrade points here), Sticky Situation (which is unlocked at Level 20) is easily one of the best aerial attacks in the game. Spidey jumps in the air and spins, covering his enemies in webs and dealing gigantic damage. It’s analogous to his extreme attack, but a basic ability! When synergized with an attack that lumps enemies together it makes short work of grunts and can quickly decimate a stagger bar. The same can be said for Webspinner, which holds three ability types and is worth the upgrade. Just make sure you stay outside of the action and hammer the Y button - it stuns enemies but when upgraded is still one of the best damage-dealing attacks in the game.

T’Challa is one of the best brawlers in Marvel Ultimate Alliance 3 - so it’s a shame that you unlock him so late in the game. When you pick him up though, you definitely want to slot him in your team at the earliest convenience. As well as slashing away like a madman, his aerial attacks bring the claws out, slicing into enemies and juggling them where possible. He’s also surprisingly resilient and can hold his own in a fight.

Abilities wise - you want to level up Bast’s Fury as early as possible, it’s a reflective ability in that it absorbs damage and then quickly throws it back at the offending enemy. If you want someone similar you could look into Captain America too, who uses his shield to reflect damage and actively fire lasers back at enemies, instead of turning it into an AOE explosive. The rest of T’Challa’s abilities are great too, Panther Claw is a directed attack that is very much ‘death by 1000 cuts’ and can quickly mince through a beefy enemies stagger bar.

An uncompromisingly brilliant addition to any alliance - Psylocke is the real deal, combining piercing damage with energy blasts. It’s like wielding two sharp lightsabers that you can charge and turn explosive. Her three-punch combo when combined with the X button slams down onto the ground, causing a psychic shockwave. Her aerial attack is similarly brilliant, where Psylocke spins her blades into a fury - it’s excellent crowd control.

Abilities wise put all your points at first into Psychic Knife, which has B Damage and A Stagger at the maximum level which, if you compare it to most other abilities is fairly revolutionary. You can also charge the attack by holding down the button, so make sure to position yourself far away and use it on bosses and stagger bar enemies to melt their health and support the rest of your team!

The big baddy himself - Magneto is the first villain on this list and also a very difficult character to unlock - but I thought I’d include one character for those already in the late-game looking to make tactical team decisions. You can pick up Magneto by finishing the second Infinity Trial rift, which should be easy if you’ve beaten the game where you’ll be over the level threshold necessary to beat it.

One of Magneto’s basic attacks is a rift that drags enemies together - which is already more than enough reason to use him - it’s overpowered and perfect for collecting enemies for the rest of your team to wipe the floor with! All of his abilities are also at the very least causing C grade damage, which makes him a very powerful all-rounder, especially given his excellent Mastery and Resilience. Fatal Attraction is where you should spend most of your points - you can charge up to a gigantic AOE bomb that will purge through an enemies stagger bar. Master of Magnetism is also uniquely powerful too, as Mags picks up two debris balls and smashes them together to wallop an opposing force - perfect for the enemies you’ve trapped in the rifts created via his heavy attack!