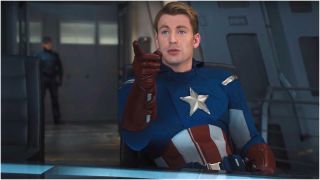 While the Marvel Cinematic Universe (MCU) might be filled with Asgardian gods, genius playboy billionaire philanthropists, and 100-year-old super soldiers, the movies are all remarkably relatable.

A lot of that comes down to the sheer number of pop culture references, which either bring our heroes back down to Earth or situate them within a certain nostalgic time period (à la plaid shirts and No Doubt in the '90s set Captain Marvel). This is a narrative trait the writers have picked up from the comic books, and now these pithy points are a staple of the MCU.

Sure, their inclusion may have been turned up to 11 since the introduction of Spider-Man, who seemingly can’t go a scene without mentioning some old movie, but pop culture references have been around since the very beginning of the blockbuster universe and appeared throughout every movie so far.

So, from The Incredible Hulk to Spider-Man: Far From Home, here are 25 of the best to appear in the MCU so far. Let us know if we missed any of your favourites in the comments below.

The Empire Strikes Back – The Incredible Hulk

In one of the first scenes, where Ed Norton's Bruce is working in a Brazillian soda factory, the machine sounds that can be heard are the same sounds as the carbonite freezing unit in Cloud City from Star Wars: The Empire Strikes Back. Of course, it’s not the only reference to the iconic sequel in the MCU – every Phase 2 movie features a person have their hand cut off (just like Luke during the final moments of Episode V) and Spider-Man references the movie in Civil War.

The Wu-Tang Clan member’s debut solo album was called Ironman, so it’s no wonder he produced a song for the movie. It was called “Slept on Tony” and is heard during the jet scene with Rhodey getting hella drunk. The rapper also appears in a party scene, but it didn’t make the final cut.

The climactic battle scene sees Iron Man and War Machine, at one point, facing off against some of Hammer’s drones in a dome filled with greenery, forestry and a waterfall. This is a nod to the 1972 film which also featured a geodesic dome and tech robots called drones.

When Peggy, Steve and Tommy Lee Jones’ Colonel Philips are chasing after a Hydra plane, the latter pushes a red button that speeds the car up despite a warning sign that reads "Do not push". This is a little nod to his Agent K character in Men in Black, who, in a similar scene, tells Will Smith’s Agent J to push a little red button too.

Kenneth Branagh’s Thor, one of the most hard-done by entries in the MCU, contains one of the best lines in the series. S.H.I.E.L.D. Agent Garrett spots Lady Sif, Fandral and Hogun arriving in New Mexico and his nicknames are *chef’s kiss* perfection.

Tony Stark might be the king of pop culture nicknames and this one is pretty damn apt for the surfer-looking Asgardian God of Thunder. So good, in fact, that Thor: Ragnarok references the reference by making it Thor’s password to access the Quinjet. Damn you, Stark.

Another movie zinger from Tony Stark, who references Westworld, the 1973 movie starring Yul Brynner as a killer cyborg. In Iron Man 3, the Extremis-enhanced villain, Eric Savin, looks a lot like Brynner’s Gunslinger and is just as deadly – as it turns out, though, he’s no match for the Mark XLII.

Jane Foster’s ringtone is by Young De, aka Demrick, and produced by Xzibit, and rings at an inopportune moment in the film. Alan Taylor, the director, said they chose the track because it “bugged” everyone when they heard it.

“The Path of the Righteous Man” - Captain America: The Winter Soldier

The quote written on Nick Fury’s gravestone is a reference to his Pulp Fiction character who famously recites the bible passage Ezekiel 25:17 before murdering a young guy on the orders of Marcellus Wallace.

"Well on my planet, there's a legend about people like you. It's called... Footloose” - Guardians of the Galaxy

Star-Lord uses the movie to get Gamora to dance and describes its “hero” Kevin Bacon. The gag runs through to the end of the film and later in Avengers: Infinity War. When Thor calls the Avengers “Earth’s Mightiest Heroes” Mantis replies: “Like Kevin Bacon?” Footloose is mentioned again on Titan when Star-Lord asks if it’s still the greatest movie in history. He was not happy with Spider-Man’s answer.

When Scarlet Witch puts a vision into Thor’s mind it includes three people wearing a wolf, a ram and a hart (AKA a stag) mask. This refers to Joss Whedon’s Angel series which includes the villainous law firm Wolfram & Hart. Fun fact: Whedon put a Thor reference in Buffy the Vampire Slayer, too, as Olaf the Troll God’s Hammer is his version of Mjolnir which she can wield because she is worthy.

“Playing ‘Disintegration’ by the Cure” - Ant-Man

There is nothing like an epic anthem to soundtrack a fight scene and it's even better when the villain, in this case Yellowjacket, accidentally picks it by yelling "I'm going to disintegrate you!" Good job, Siri.

When Scott Lang is messing with Tony’s suit he says, “It's your conscience, we don't talk a lot these days,” which is pretty much exactly the same line Marlin uses with Dory in Finding Nemo. Maybe Scott watches a lot of children’s movies with his daughter Cassie?

The tempestuous early relationship between Stephen and Wong is one of the best and their first meeting sees the Doctor rattling off a few famous names including Aristotle, Drake, Bono and Eminem. To be fair, Wong is iconic enough to go by one name.

Star-Lord says Yondu looks like the famous nanny as he floats to the ground holding his arrow. When Yondu asks “Is he cool?” Star-Lord looks at his surrogate father and says “Hell yes” in a super poignant recognition of love. *Weeps*