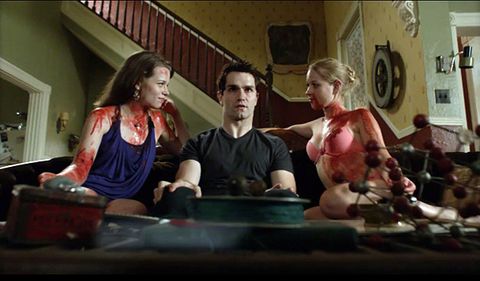 Being Human USA 3.05 “Get Outta My Dreams, Get Into My Mouth” TV REVIEW

THE ONE WHERE Aidan and Sally pluck forbidden fruit, and Josh embraces his inner wolf.

VERDICT A much better episode than the previous one, that has me hopeful for the rest of the season.

When we open with Liam and a couple of other wolves hunting a sick vampire, we know he’s going to feature prominently. The season needs a decent Big Bag and Liam has been set up from the very first scene in episode one.

Sally is still overeating, and everyone is still laughing and joking about it – hopefully this particular smoking gun will go off with a significant bang, soon.

Aidan dreams he’s in a hospital, and that Bubble Boy – accompanied by two nurses straight out of an adult entertainment movie – is his doctor, who allows Aidan to feed. There’s something familiar about the nurses, however, and when Aidan wakes and they’re still there, we recognise them as the two women he and Henry killed last season. They’re still with him. It’s impossible to tell at this stage whether they’re actually there in ghostly form, or if it’s a symptom of a breakdown or guilt. They stay with him throughout the episode, and there’s no sign of them leaving ay time soon.

Interestingly, the small amounts of Bubble Boy’s blood that Aidan takes are not only enough to sustain him, but they’re making him strong . No wonder Liam – who is anti-vampire at the best of times – makes Aidan his special project!

Meanwhile, at her new job, Sally’s seeing ghosts, but – rather uncaringly, considering her history – she wants nothing to do with them, dispatching them with a callous, “This isn’t the Ghost Whisperer,” and the closest iron implement to hand.

And at last, Liam ups the danger factor, visiting Josh at his place of work, and threatening to kill the housemates if they don’t kill Aidan. Josh mans up beautifully, by visiting Liam at his hotel room, and threatening him with a gun. Even with his weapon he’s hopelessly outclassed, and Liam respects him for it, later delivering Erin back to Josh and Sally. It looks like this is the end of Liam’s arc, but let’s hope not: he’s far too interesting – and dangerous – a character to let go so early, and with so little resolution. Perhaps the witch will turn out to be the real season three threat, though we’ve seen very little of her so far.

Spirited comedy at Sally’s work where the ghost of Max’s mother disapproves of their relationship. Sally and Max go on a date and when they later get it on at the funeral home, we discover that it was Max’s first time. Bless. His mother has been possessing his girlfriends and forcing them all to leave – none of them being good enough for her boy. Sally acquires a talisman that prevents possession and confronts the mother, who eventually relents, allowing Sally and Max to be together. Awwww…

And at the hospital, there’s a comedy of errors when Bubble Boy begins to suspect that Aidan is a vampire, and he tries everything he can to catch him out – asking him to walk in front of mirrors (that doesn’t work) and showing him a crucifix – shades of Hamilton in Love at First Bite . Aidan skillfully deflects BB and suggests he’s been watching too many horror movies. The scene where Aidan – having fallen asleep and dreamt of killing a nurse – wakes all vamped up, while Bubble Boy watches on, is more priceless than the promises in a Mastercard ad.

BEST LINE
Aidan’s ghosts: “You want to torture yourself for all the harm you’ve done, and we’re here to help you with that.”

• Read our other Being Human USA reviews