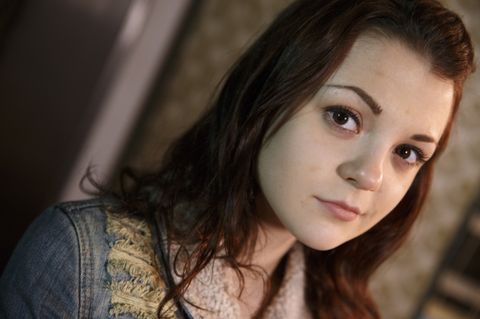 Being Human 5.05 “No Care, All Responsibility” review .

THE ONE WHERE Hatch and Rook use a young woman to drive a wedge between Hal and Tom.

VERDICT For a couple of episodes now you may have been wondering, “So, when is Captain Hatch’s plan really going to kick in?” He seems to have taken an awfully long time to make the most of the presence of a werewolf and a vampire under the same roof. Now, finally, he does.

The means don’t exactly come as a surprise. It’s clear that Natasha has some kind of hidden motive: her back-story is very sketchy, she lets Hal drink her blood with remarkable ease (what ordinary person would prefer having someone noshing on their thigh to an ordinary beating?), and it doesn’t take a genius to make a connection between the young girl seen in the flashbacks to Rook’s past and this 19 or 20-year-old woman.

All, the same, it’s a very affecting scheme. Hal falling off the wagon is a horrible sight – once again, Damien Molony’s performance is perfection itself. And one thing you don’t see coming is Natasha’s throat-slitting suicide. It’s a truly shocking moment, not only because it’s so gruesome, but because of the effect it will have on the besotted Tom, and the knowledge that it will surely irrevocably wreck his friendship with Hal.

At times, this is an achingly romantic episode. It didn’t look like Hal and Alex would ever kiss; when they do it’s a moment with real sizzle - mingled with horror, because we know that it’s driven by the taste of blood. Alex’s denunciation of Hal after she stumbles in on him gorging himself is heartbreaking stuff.

As penultimate-episodes-of-the-series go, ”No Care, All Responsibility” is not Being Human ’s best - it can’t compete with the shock of seeing Nina stabbed in series three, for example. But the knowledge that this is the final series adds extra weight. Anything is possible, including a tragic ending for all three lead characters; in particular, it’s hard to see a way back for Hal. My money’s on a last-act shot at redemption in which he sacrifices himself in order to defeat the Devil.

NITPICKS By now, you’d think the characters would be fully aware that when a human character dies their ghost is likely to immediately pop up, and act accordingly. All Hal has to do to clear his name is wait for Natasha’s ghost to turn up, and ask her everyone what happened.

HILARIOUS HEADLINE OF THE WEEK Did you notice Captain Hatch’s newspaper when he’s being quizzed by Hal? The headline is: “IS HEALTH AND SAFETY TURNING BRITAIN’S FARMERS GAY?”

The punky track heard as Natasha is chased into the hotel is “Mouth Of The Monster” by Irish band Dirty Epics.

While tired to a chair, Gilbert & Sullivan fan Hal babbles some of the lyrics from “I Am The Very Model Of A Modern Major-General” (from The Pirates Of Penzance ).

As Tom whittles a stake, we hear “Hey Man, Nice Shot” by Filter.