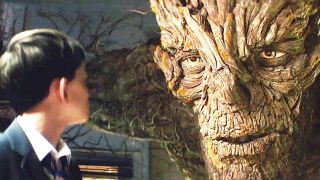 If you’ve read the book you’ll know what to expect, but everyone else needs to heed this warning: bring tissues – lots of tissues – when you go to see A Monster Calls. I saw a recent early screening at the Toronto Film Festival 2016, and judging by the sniffles reverberating around the cinema by the time the credits rolled, the staff probably had to come in and mop the seats down afterwards.

If you’re not familiar with the book or the movie, here’s a quick catch-up: Connor (Lewis MacDougall) is stoically dealing with his mum’s (Felicity Jones) serious illness, as well as having school bullies and a fearsome grandmother (Sigourney Weaver) to contend with. He’s got a big imagination and an arty streak, though, and after he dozes off one night, he’s visited by the monster of the title – maybe real, maybe imaginary, definitely metaphorical – and given a fairytale-like promise of three stories that will enlighten him, before he’s expected to produce his own fourth story that will ‘reveal his truth’ in the process. Still with me?

The monster in question is a giant tree-thing (imagine Groot on growth hormones), voiced and performance-captured by Liam Neeson with his usual snarling authority. He appears at precisely the same time each night, to share wisdom through stories which are presented on screen as beautifully animated interludes. The power of storytelling is reemphasised throughout, but not always in the obvious ways that you might expect.

Meanwhile, scenes of Connor’s home life are very much at odds with the Monster’s stylised tales; set in a nondescript British town, the setting is endlessly grey and dreary, with Connor’s mum’s illness looming over everything like an ominous shadow. His grandmother steps in when his mum’s condition deteriorates and a new treatment plan is sought. Conor’s dad (Toby Kebbell) is largely out of the picture.

These sequences are enough on their own to get the tear ducts itching, thanks in part to MacDougall’s naturalistic performance, and the chemistry he shares with Jones. In fact, the grimness of Connor’s reality is so effectively conjured that it might make it a hard sell as a family day out at the multiplex. But it’d be a shame if that prevented this film from finding an audience, as its frank depiction of the effect illness can have on a family is sensitively handled, and it touches on some pretty profound sentiments. I’m welling up just thinking about it again…

Whether you start sobbing early on, or if you’re able to dam the tears until nearer the climax, rest assured, the floodgates will be opened. Unless your heart is made of actual stone, you’re running a serious risk of dehydration. This movie probably actually counts as therapy. The tears feel earned though, rather than cheaply stolen. Director J.A. Bayona (The Orphanage, The Impossible) has experience traversing tearjerker territory, and this is no exception. It makes you wonder what he’s going to do with the Jurassic World sequel he’s directing next: are we going to end up sobbing over a T. Rex?