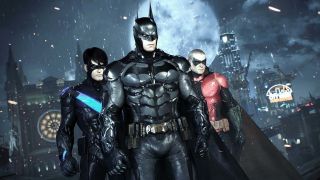 Any rando can post just about whatever they want on 4chan, but this particular rando brought receipts: seven previously unreleased pieces of concept art that show what Gotham City and some of its most (in)famous residents look like in a post-Knight world. I can't verify their provenance, but they do look convincing on their own. According to the leak, the sequel would have taken place many years after the end of Arkham Knight and starred Damian Wayne, the son of Batman and Talia al Ghul (it's a whole thing in the comics).

Sadly, none of the leaked concept art shows Damian himself, but you can probably picture what he'd look like taking up the mantle of Batman. It looks like some other characters have passed the torch as well, with an unknown woman now wearing the black mask of, um, Black Mask. You can see a full gallery of all the pieces on Imgur.

Check out these images from the cancelled DC Batman Arkham game starring Damian Wayne. This game was most likely a Batman Arkham Knight sequel, but we cannot know for sure. Those of you that have followed the channel for a while recall me describing some of these. pic.twitter.com/mUQ6TXbUmqAugust 13, 2019

The concept art pegs the game's work-in-progress title as Project Sabbath. This particular project died on the bat-vine but rumors continue to swirl about the next project for WB Games Montreal. That announcement for a Destiny-style Suicide Squad game never surfaced, though the studio must be working on something (with rumors now pointing toward a Batman: Court of Owls project).

The same goes for Arkham trilogy developer Rocksteady Games, even though the only solid thing we know about its next project is that it by no means is about Superman.

Soothe your disappointment for games not made with a look forward at new games 2019.