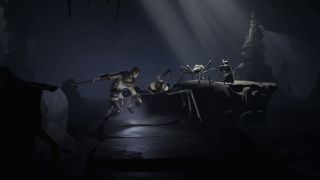 Moody, melancholy action-RPG Ashen finally has a release date. And it's... today, actually. As pointed out by Wario64 on Twitter, Ashen is now available, at least on Xbox One.

You might recall this visually striking game from its initial reveal back in 2014, or when it was part of Microsoft's E3 2015 press conference (where it was revealed to be an Xbox One console exclusive). It's a game about a lone adventurer who is searching for a place to call home, while also saving the world from ancient evils and fighting to rekindle the light that will stave off darkness for another era. It also has a companion NPC with a fabulous mustache and pipe, so there's that.

Things have been relatively quiet regarding Ashen's development for a couple years, but The Game Awards seem to have provided developer A44 and publisher Annapurna Interactive the perfect venue to announce the launch - and the date itself isn't the only surprise.

If you've got Xbox Game Pass, congrats! It's included in your subscription. And if you want to play on PC, Ashen is available exclusively via the recently-announced Epic Games Store.

We've actually played through the game and will have our Ashen review available at 9pm PST so you can read what we thought of it. Otherwise, feel free to jump on in - the wait is over.