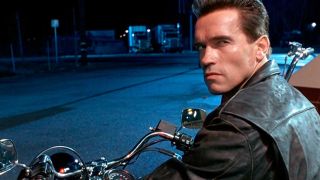 There are many memorable scenes in Terminator 2 - which will be getting a 3D re-release in cinemas next year - and the arrival of Arnold Schwarzenegger's T-8000 is one of them. That's the iconic scene which Arnie's doppelgänger son Joseph Baena chose to recreate with aspiring filmmaker Ben Hess, and the results are pretty impressive (and downright spooky).

Watch the re-enactment and see how it compares to the original below...

I'd wager Schwarzenegger Sr is more than a little impressed with his son; In addition to the clothes, the boots, and the motorcycle, Baena even got his father's cool stare down pat. If there is another Terminator film in the works at Paramount, Arnie might not need to return after all.