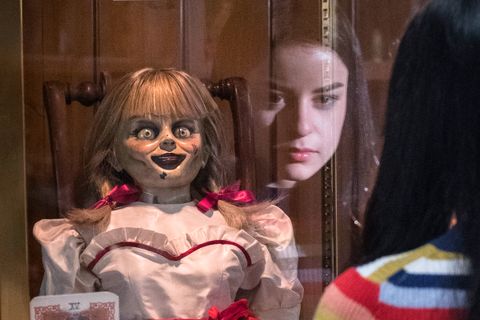 Creakily slick like the rest of The Conjuring series, this spring-loaded spook story hits the mark more often than not.

“What is your fascination with my forbidden closet of mystery?” asks an exasperated Chief Wiggum of his son Ralph in The Simpsons. The same could be said by Conjuring Universe heroes Ed (Patrick Wilson) and Lorraine Warren (Vera Farmiga) about their clearly haunted “artefact room”. Their mistake? Bringing home the eponymous doll, locking her up, then leaving town, while making their troubled daughter Judy (Mckenna Grace) and her babysitter Mary Ellen (Madison Iseman) promise not to meddle.

Needless to say, that doesn’t happen – Mary Ellen’s friend Daniella (Katie Sarife) soon breaks in – but she has a genuine reason to explore what amounts to a room full of horror Easter eggs, each awaiting their own spin-offs.

Yes, it’s cynical and derivative (Judy practically quotes The Sixth Sense verbatim at one point), but series writer Gary Dauberman makes the leap to director with sure feet. Despite her rictus grin and tobacco-stained skin, Annabelle is a tiny bit lame, so instead he shifts the focus of her role to being, as Lorraine puts it, “a beacon for other spirits”. Essentially this gives him carte blanche to hurl whatever he likes at the screen – a dead priest, a murderous bride, an Essex hellhound, a phantom ferryman – runtime be damned. “What else did you touch?” chides Judy. “Everything!” confesses Daniella.

As smooth as the 1970s tunes that play on repeat, and as spook-packed as a Scooby-Doo special, Annabelle Comes Home delivers on its – admittedly slim – promise. The acting’s decent, the kids are, unusually, sweet to each other, and there’s a shot of genuine grief to anchor things when they get silly.

Creakily slick like the rest of The Conjuring series, this spring-loaded spook story hits the mark more often than not.