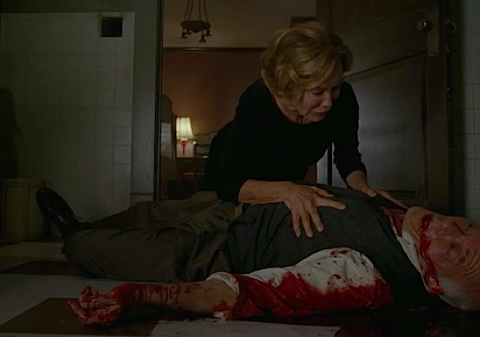 THE ONE WHERE The Angel Of Death moves into Briarcliff, Eunice flexes her demonic muscles and Grace takes a bullet for Kit.

VERDICT The centrepiece of this episode is another remarkable performance from Jessica Lange as she finally confronts the ghosts of her past. In just a couple of scenes, she goes from considering suicide and bantering with the Angel Of Death (more on her later) to finally accepting that she killed little Missy in that hit and run. Only she didn't! Missy, it turns out, is alive and well. That could have been an extremely hackneyed twist, but the mixture of shock, relief and horror that Lange expresses sells it perfectly. It's a terrific scene – one of the best this season. You even forgive the fact that her parents are clearly spectacularly thick for not working out that Jude was the driver of that car...

So where to now for our favourite alcoholic nun? She's gone from being the monstrous queen of Briarcliff to a broken, suicidal wreck. Presumably the only way is up! Eunice calls to taunt her at one point. Jude's not the sort to take that sorta shit from anyone; she'll be back at Briarcliff before too long, and looking to kick some demonic arse.

This week's new addition to the cast was none other than Death herself. Sandman fans may be disappointed that she's not a sexy goth, but instead the fabulous Frances Conroy (Moira last season, though best known as Ruth from Six Feet Under ). She invests the character with calm, sensitivity and understated creepiness. She looks great too, with huge, pitch black wings and a veil. An interesting addition to the cast, but also a slightly problematic one. Why haven't we seen her before? There's been no shortage of deaths this season. And while I certainly welcome the addition of Conroy (and the removal of Grace, who was never the most exciting of characters) the constant introduction of new weirdoes (the faux Anne Frank, killer girl last week and now Death) is taking time away from the regulars. It's getting a little annoying only seeing Kit for about a minute each episode.

Speaking of Kit, he really isn't having the best of luck, is he? After breaking out of police custody (somewhat improbably) he heads back to Briarcliff, where he's attacked by a rasper, and literally caught red handed after killing it. Then Grace gets shot. His story is happening in such a piece-meal fashion... Give the guy some decent screen time, please!

We're past the halfway mark of the story now, and while this was another strong instalment, there is a nagging worry that the show is kind of unravelling. Some of the plotting this week was beyond silly (see below...) and it's hard to keep track of everything that's going on. Now that might be part of the plan, and if everything comes together, it will be a masterstroke. But at the moment, I suspect that Asylum may turn out to be just an enjoyably ramshackle folly.

HUH? Lana escapes from Bloody Face's sex’n’slaughter den and hitches a lift with a guy… who also happens to be a misogynist nutter (plus, Ethan from Lost !) who then shoots himself. Wut? The whole scene comes out of nowhere and is so utterly random, you wonder if it's all a dream. But then she finds herself back at Briarcliff. Presumably, it's important to the narrative that Lana is in the asylum, rather than telling the world that Thredson is a psychopath with a serious Oedipus complex, but it's also maddening.

INTERESTING... Neither Arden or Eunice know who performed Grace's sterilisation. So the demon isn't omnipotent, despite some of her bold claims.

REFERENCES A couple of the nuns at the start of the episode talk about watching Lilies Of The Field – the 1963 adaptation of William Edmund Barrett's novel of the same name about an African American itinerant who helps nuns build a chapel.

BEST LINE
Thredson (to Lana): “I don't want to hurt you. I want this to be as painless for you as possible, so I will give you a choice: I can either cut your throat or I can strangle you. I don't believe in guns.”