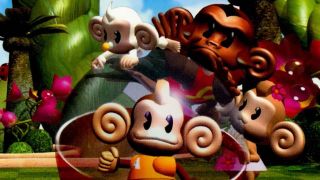 We could be rolling across skinny platforms playing mini golf with our Monkey avatars again in a new Super Monkey Ball. A new Taiwanese rating for the series points to a new upcoming release for Nintendo Switch, PS4, and PC.

A new rating doesn't necessarily mean a new game or remake, but it does make it more likely. The most recent Super Monkey Ball game was Super Monkey Ball Bounce the released on mobile in 2014, although it was nothing like other games in the series. Super Monkey Ball: Banana Splitz, which was more of a return to form for the franchise, dropped two years earlier on PlayStation Vita.

There has been a resurgence of 3D platformers in recent years with Yooka-Laylee, A Hat in Time, Psychonauts 2, and Mario Odyssey all making the genre feel alive again. The original Super Monkey Ball games on GameCube were a delight but later sequels lost the simplicity that made them special. Hopefully this new entry, or remake of some sort, can bring some excitement back to the series.

Looking to revisit some other platformers after hearing about the return of Super Monkey Ball? Check out the best platform games ever (that aren't Mario).