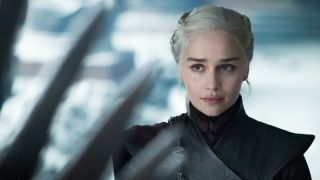 Game of Thrones may have wrapped in May, but we're nowhere near done seeing adaptations of George R.R. Martin's expansive sourcework on the small screen. We already know about one prequel series, starring Naomi Watts and informally codenamed Bloodmoon, and now we're learning about a new prequel series based on Martin's supplementary Fire and Blood novel, set 300 years before the events of Game of Thrones.

Deadline is reporting that a sequel centered around the Targaryen dynasty in its death throes is close to getting a pilot from HBO. The series is being helmed by George R.R. Martin himself, along with the co-creator and executive producer of Colony, Ryan Condal. Martin had hinted at the project for a while on his blog, imploring fans looking for answers on the unannounced prequels to read Fire and Blood for clues.

Fire and Blood tells the tale of Aegon the Conqueror, his conquest and rule in Westeros, and the vulnerable dynasty he left to his children. If the series ends up being green-lit, you'll likely see the formation of King's Landing and the Iron Throne, the birth of the Baratheon house, and plenty of incest and dragons. In fact, Deadline says the series will prominently feature the Targaryen civil war known as the Dance of Dragons.

For my money, a series about Aegon's Conquest and the political inner-workings behind Targaryen rule in the Seven Kingdoms is far more exciting than the more ancient history - the origin of the White Walkers and "the Starks of legend" - it seems Bloodmoon will center around. If based on Fire & Blood, this series could more closely resemble the Game of Thrones we already know, with all the cleverly-written extended dialogue sections and soul-destroying tragedy, than what's been revealed about Bloodmoon.