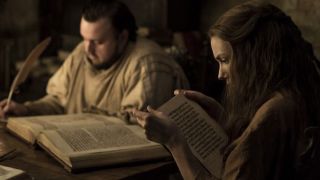 Game of Thrones season 7 has been and gone but if you’re aching for any Westeros-related news – anything at all – then we’ve got something to feed your hunger. There’s now a fifth Game of Thrones spin-off in development – which is made all the sillier by the fact that only one will get made. It’s a great big Thrones-off – and here are the latest details.

EW has revealed that Game of Thrones writer Bryan Cogman will be working in tandem with George RR Martin to hopefully bring his series forward. The main goal for all five spin-offs, as Martin mentions on his blog, will be to air in “2019 or 2020.” It has to be said, that’s probably dependent on Game of Thrones season 8 taking a gap year in 2018 otherwise Thrones fatigue might set in. And we wouldn’t want that now, would we?

Martin has set out the details of the fifth spin-off, stating that it is definitely a prequel and that it is set during “a very exciting period of Westerosi history.” For now, that’s about as much concrete information as we’re getting.

Cogman has penned 11 Game of Thrones episodes (ten have aired, plus one more to come), including Sam Tarly’s debut and that totally not awkward bath scene between Jaime and Brienne. The man knows his Thrones, to put it mildly, and it’s interesting to see him jump on board relatively late in proceedings. My money’s on this getting made.

Cogman, though, is not the only horse in the running. Details on the other four spin-off writers can be found here. Martin, however, has shed some light on the process, to clear up any confusion: “We could possibly see two or even three make it to the pilot stage, with one series emerging on air in 2019 or 2020… and the others maybe later.”

Is this Game of Thrones spin-off contest all getting a bit much? Yes. But I wouldn’t have it any other way.