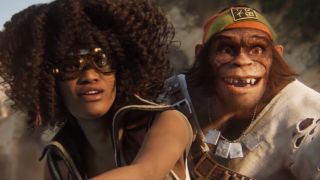 Anyone as excited about Beyond Good and Evil 2 as I am will be feeling all kinds of emotions right now. Excited and slightly terrified that both Pey’j and Jade are making a comeback, but also very, very aware that this game is still a long way off. In a behind-closed-doors, hands-off demo at E3 2018, that latter part was made abundantly clear. Beyond Good and Evil 2 is a huge, seriously impressive, game but it’s still in the pre-alpha stage and from the sheer size of the Galaxy Viewer UI alone, Michel Ancel and his Ubisoft Montpellier crew have some seriously big ambitions for this game.

The nerves surrounding the inevitably long wait for a release date aside though, Beyond Good and Evil 2 is already shaping up to be quite an interesting game, full of social commentaries and the kind of space opera goings on that you’re hoping for. Here are seven things I learnt about Beyond Good and Evil 2 directly from the development team themselves, including info on weapons, story and your very own Space Pirate Captain.

1. Hybrids are the inferior race in System 3

There are two types of people in the game’s universe, which is known as System 3. There are humans, and there are hybrids, the latter created by splicing animal DNA with humans, resulting in the kind of unique creature that you can find in Pey’j or the hybrid monkey, Knox. But of course, with differences comes discrimination, and despite the fact this is a game set in the future, there’s still plenty of discrimination. In System 3, particularly on the planet of Soma, hybrids are very much lower class citizens.

“The corporation in System 3 are using hybrids as man power - or as hybrid power, as I should call it - to run the society,” explains Guillame Brunier, Senior Producer on Beyond Good and Evil 2. “They don’t consider them as real citizens. They’re subclass citizens and when they don’t need them anymore, they just dispose of them.”

Several times the hybrids are referred to by the team as the humans’ slaves, created merely to gather raw material for the rest of society to use. During our gameplay demo we see their spare parts lying in bins after they’ve been disposed of, and another hybrid monkey being experimented on in the temple below Ganesha City. Thankfully, they can escape from their horrible lives and become Space Pirates, which is the most rebellious act anyone can do in System 3. And it sounds like a lot more fun.

2. The planet of Soma is split into two halves

Ganesha City, where the majority of the gameplay in the trailers so far takes place, is located on a planet known as Soma, which is part of the Deus subsystem. This planet is actually quite an interesting place, because of its position within the galaxy.

“It’s actually split into parts,” says Emile Morel, Creative Director on Beyond Good and Evil 2. “One side of the planet is always turned towards a gas giant. It’s protected by this massive planet, so on this side you’ll find oceans, forest, mountains, rivers… everything you would find on Earth. The other is always turned towards space, and this side of the planet is like a massive wasteland. It’s frequently bombarded by meteorite showers coming from space, which create giant craters in the ground. On this dangerous side of the planet, the humans are sending hybrids slaves to collect precious minerals that are falling from the skies; raw materials.”

“From this specific ecosystem new beliefs and new religions have been born. The people now on Soma believe that the Gods themselves are protecting them on the safe side of the planet. And the humans are telling the hybrids that when they go look for raw materials on the dangerous side, they’re actually on a godly mission and they even make them believe that if they find a very rare gem from the meteorite, they could become the Chosen One and win their freedom so they aren’t slaves anymore. Of course, that happens very, very, very rarely and it’s just a way for them to manipulate the hybrids.”

It’s part of your job as a space pirate to try and dispel that myth, and help rescue some of these hybrid slaves to recruit as part of your crew.

3. The way character customisation is handled is quite unique

And speaking of hybrids, did you know you can actually play as one? Yes indeed, Beyond Good and Evil 2 is the kind of action adventure RPG where you can make your own character, but interestingly, it’s doing things a little bit differently.

“The first expedition came from Earth, and when they reached System 3 after a very, very long journey in space, they discovered that they’d been exposed to radiation and disease, and because of that they couldn’t have children anymore. They became sterile,” explains Morel. “ The only way for them to populate this new Solar System to make sure that humanity would survive was to clone themselves. They had a cloning device on board that first ship, so they started cloning themselves to populate System 3. That’s really important for us, because it means all the characters that you will meet in System 3 in Beyond Good and Evil 2 are actually clones; clones coming from that original, limited DNA they had on board that first ship.”

It’s from this DNA that you’ll be able to create your own customised Space Pirate Captain from. From what I was told at E3, there are currently plans to have eight hybrid options on offer, along with a variety of human clone DNAs to choose from. You’ll even be able to use Pey’j, Knox or Shani DNA to create your own character, so if you like the look of any of those characters, start creating your own version in your head already. Plus, on the game’s official website, hybrid tigers and pandas have been confirmed for the game too - although I’m keeping my fingers crossed for hybrid wolves.

“When you create your character, you will be able to choose the visual identity from all the DNA strands that we are using to create all the characters from the game,” adds Morel. “You will have a lot of choice. If you want to be an hybrid from different species you can do that; you can be an hybrid like Pey’j or like Knox. You, of course, can also be a male or female character, from different ethnicities.”

4. You’ll have a good array of weapons

Every space captain - and some other members of System 3 too - will have the same set of weapons and gadgets at their disposal. You’ll get a gun, shield, sword and even a jetpack that you’ll use for combat in the game. The sword channels that same melee focus that the original game had with Jade’s stick, but combined with short flights using the jetpack and your gun too, plus a shield for additional defence. But although that might sound like a fairly traditional arsenal, there’s actually more to Beyond Good and Evil 2’s combat than just this little lot.

Every weapon - including those that are on-board your ship - can be equipped with an augment. “Augments are tech abilities - they are not magic - that you can equip on your gun, your sword, your shield,” says Morel. “These abilities are tactical, and include things like pushback, and paralysis.”

“You need to carefully use all the augments and use them wisely to beat some enemies, especially when you are in a complex situation. [Augments are also] a way for you to define who you are as a Space Pirate Captain; what is your playstyle. You will find these augments everywhere in the galaxy. You will steal them, loot them, rob them, and maybe trade them and stuff.”

It sounds like you’ll collect augments in Beyond Good and Evil 2 like your deck in games like Hearthstone, switching them in and out of play both according to the enemy you’re facing, as well as your playstyle. The same goes for your ship’s weapons, which could be a case of applying a slowing augment to your missile, so that the opposition is forced to move more slowly after it’s been hit by your missile, adding an extra level of tactics to the combat.

6. Your spyglass is going to come in seriously handy

Along with all that weapon and augment stuff, there’s also your spyglass. Like other games, using your spyglass offers you information about the world around you, along with the NPCs that inhabit it. In my demo, scanning the scientist performing experiments on the hybrid monkey showed that she was equipped with a variety of augments, including the ability to heal. The mercenary next to her, on the other hand, had a pushback and slow augment.

“[Enemies] can share the same augments as the player, but you might face an enemy with an augment you don’t know,” says Brunier. “Scanning lets you see what they have so you can adapt the way you are playing beforehand. It adds diversity and challenge, because each enemy can be a different combination of augments.”

The spyglass also lets you see whether an NPC could be a good fit for your ship’s crew. Scanning the hybrid patient informed me that he’s a former mechanic for example, which might be just what you need to keep your ship in tip-top shape, and provide you with an opportunity to get the hybrid out of that awful place.

7. Jade isn’t the girl you know and love

Before I leave you reeling with the possibilities of the Beyond Good and Evil 2 gameplay, the team did give us a tiny hint as to what’s going on with Jade. She appeared at the end of the E3 2018 trailer, looking rather sinister and dark indeed - very much unlike her persona in the original game. But, this is a prequel after all, and it turns out Jade has quite a past. “When it comes to Jade we want to keep some mystery,” says Morel. “But the thing is, Jade is hunting down pirates and there are many, many legends about this young girl killing all the pirates.”

The fact that you’re a pirate and Jade’s a pirate hunter means that we’re about to go head to head with our old heroine. Prepare for the unexpected here.

Beyond Good and Evil 2 doesn’t yet have a release date, but when it does arrive, it’ll be coming to Xbox One, PS4 and PC.