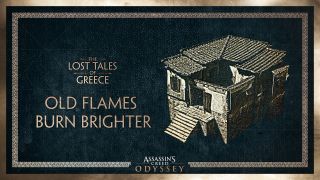 The latest mainline entry in the Assassin's Creed franchise continues to receive fresh updates that both add content to the story and smooth-out the overall playing experience. Ubisoft is detailing the latest update coming to Assassin's Creed Odyssey, which will add a new Lost Tales of Greece episode, a new items pack, new features to the Story Creator Mode, and a patch to address some vague in-game issues.

The free mobile game Assassin's Creed Rebellion will also be getting new features as part of the August update in the form of a limited-run event.

You can access the new episode in Assassin Creed Odyssey's The Lost Tales of Greece questline, titled Old Flames Burn Brighter, for free today. The only requirement is that you've reached Chapter 5 in the story. If aren't familiar with The Lost Tales of Greece stories, they're worth checking out for the amount of new content they provide at virtually no cost to the player.

Story Creator Mode is another free feature absolutely worth exploring in Assassin's Creed Odyssey, allowing you to craft your own narrative adventures and share them with the world. You'll need access to a PC to make your stories, but once you've published one, it's available to the public regardless of platform. The August update will add to the Story Creator Mode the ability to initiate quests using quest items, implement patrol behavior, share custom playlists, and queue stories.

The Ikaros Pack is another welcome addition to Assassin's Creed Odyssey's August Update, available to buy through the in-game store or at the Oikos of Olympians August 27. The new item pack will include a gear set, a mount, and a bow.

Finally, the August Update will introduce patch 1.5.0, which will focus on fixing various "in-game obstacles" in preparation for the upcoming launch of Discovery Tour: Ancient Greece, a free virtual tour of Ancient Greece sure to please history buffs and fans of the game alike.

As for Assassin's Creed Rebellion, the Eagle's Shadow 5-Day event will bring along two new heroes and see players off to 1191 Acre to take on the Templars.

For a guide on how not to use Assassin's Creed Odyssey's Story Creator Mode, check out why Ubisoft decided to remove a bunch of fan-made farming quests.