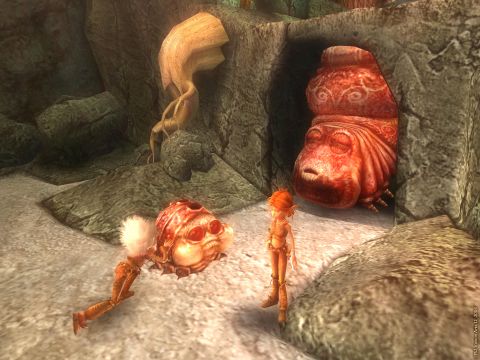 Thankfully, the game breaks up your painfully boring jaunts with fighting,increasingly smart stone-stacking puzzles, balancing on a Mogoth (think Wampa, the yeti from Star Wars) or shooting down enemy mosquitoes while riding your own winged insect. But once you’ve fumbled with the analog stick and fought the camera moving a stone block once, that's enough. You may get sick by the tenth time you have to do it... in the same level.

And who the hell localized this game? Not only is it jarring that the English subtitles don’t match the dialogue, but characters speak their lines quickly, often cutting off or running over someone else’s words. Screw saving the others, Betameche needs some damn Ritalin and some Speech classes.