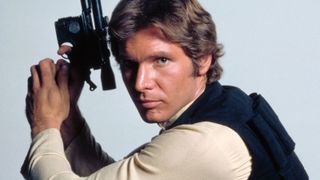 It’s all in the hair. We’ve seen disappointingly little about the upcoming Han Solo movie, outside of casting news and a few sneaky glimpses at concept art, but we now have one very concrete image to go on: Alden Ehrenreich’s quiffy Han Solo ‘do. It’s perfect right down to the last follicle. It’s totally NSFW (not safe for washing).

Woody Harrelson’s Instagram feed was the first sighting of Alden Ehrenreich’s new hair out in the wild, which was quickly followed by a post from Laura Simpson-Ternosky (Jennifer Lawrence’s bestie) of the dreamy haircut – sorry, I mean Alden Ehrenreich – playing croquet.

Life on the Thames

Team Dragon divided the vector to win the most civilized game of croquet.

Whoever sculpted those locks to resemble Han’s hair in the original trilogy deserves all the money. Seriously. It’s scarily good. I never knew hair could look so arrogant.

Maybe we’ll get more Han Solo movie news outside of the smuggler’s hair very soon but, until now, it’s all we’ve got, dammit. Besides, I still need to see how Chewie’s hair is doing. Maybe Young Chewie went through a Wookiee ‘fro phase?