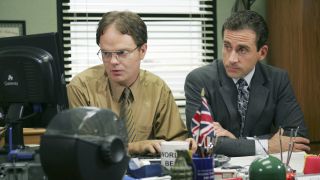 The Office is a fantastic show and is one of the main reasons I've kept my Netflix account through the years. It's a comfort that can be watched hundreds of times over and over again and Netflix has always made watching it easier.

But the ease had to come to an end at some point. The Office, Netflix's biggest show in turns of watch numbers, is finally leaving the streaming service in favor of NBC's streaming product in 2021. The Office will be available exclusively on NBC's upcoming service.

We're sad that NBC has decided to take The Office back for its own streaming platform — but members can binge watch the show to their hearts' content ad-free on Netflix until January 2021June 25, 2019

The Office was streamed for over 52 billion minutes in 2018, making it the most watched show on any streaming service. It's become a culture phenomenon years after closing its run on NBC.

It joins dozens of other major shows that have left Netflix after other studio's have started creating their own streaming services, refusing to renew their licensing deals with Netflix. Daredevil, Jessica Jones, Luke Cage, and Iron Fist have all been cancelled due to a licensing issue with Disney. Other big legacy shows like 30 Rock, Buffy the Vampire Slayer, Futurama, and the X-Files have also left Netflix in the past couple of years. They've found new homes on Hulu, Amazon Prime, and other streaming services.

Netflix is also close to losing Friends, a show that may eventually come to Warner Bros. upcoming streaming service. We'll probably see a lot more of this until the majority of Netflix content is all produced, funded, or owned themselves.

Now is the best time to pick up a copy of the entire The Office series of Amazon or another retailer, some even have hefty sales going on. It's likely the price will shoot up once people start to realize they won't be able to watching their favorite comfort show on Netflix anymore.