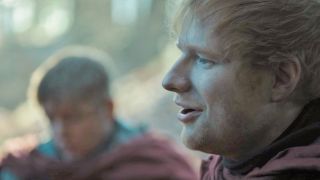 Ed Sheeran is everywhere these days, even in Game of Thrones season 7. Yep, you didn’t need to be the Three-Eyed Raven to spot everyone’s favourite love-song crooner showing up as a Lannister soldier in the season 7 premiere. What you may not know, however, is that the song he so beautifully sang has some meaning behind it: it’s actually a superb little Easter egg from the books.

Fans of the George R.R Martin novels may have had their ears pricking up once Sheeran’s dulcet tones got going, with the lyrics being borrowed from the song Hands of Gold, featured in A Storm of Swords and sung by singer Symon Silver Tongue.

Ironically enough, in the books the song – as its lyrics hint at oh-so-subtly – is about the love between a man and a woman but, specifically, Tyrion and Shae (she of being strangled in bed fame). If nothing else, it’s a neat little nod to the books at a time when things are looking more forward than back in Westeros.

If you’re one of the four people in the world who haven’t seen the Sheeran scene, check it out below, as well as Sheeran and Maisie Williams larking about on set. Just keep that sword away from his vocal chords…