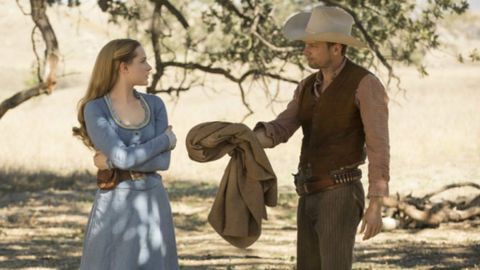 A brilliantly thoughtful episode which is dominated by Ford’s sublime speech and Logan’s, erm... ‘fun’.

“I can make that feeling go away if you like,” Bernard tells Dolores as the fourth episode of Westworld, Dissonance Theory, opens. She recounts her pain at the death of her family and in a truly human moment, asks: “Why would I want that? It’s all I’ve got.”

(Cognitive) Dissonance Theory relates to the mental stress of someone holding two contradictory beliefs and ideas; someone seeking balance between their expectations and their reality. For Dolores, it’s pretty clearly the issues between her programming versus her growing self-awareness, and for Bernard, it is about battling with Ford’s belief that wiping memories is the kindest course of action with the Hosts.

So his experiment with Dolores is in the balance but her ability to say just the right thing to protect herself is telling - first adapting an old script and then offering up something that goes perfectly against what she’s been programmed to believe. “This world... I think there may be something wrong with is world, something hiding underneath. Either that or there’s something wrong with me... I may be losing my mind.”

Bernard sends Dolores off on the Maze game - the mission that the Man in Black is on, and which we now know our good doctor is aware of. If she can find the centre then maybe she can be free, he tells her. “I think I want to be free,” intones Dolores. She still has the gun she used to shoot the Host in the barn when she wakes from her ‘dream’ to a nice cup of tea from good ol’ William, who appears to have been watching her sleep. Erm.

Maeve’s dissonance is growing also: remembering old repetitions of her familiar loop and the Westworld cleaning crew. She jots down a drawing of the strange suited man - and when she hides it under a loose floorboard she finds many more drawings of the same thing. She’s obviously been down this path before. She later discovers that the Native American communities of Westworld have incorporated these suited men (or Shades) as part of their religion.

Elsie, still vying for Westworld’s most consistently vexed staff-member award, is angry with Park leader Cullen’s attitude towards the stray Host who smashed its head in during the last episode, and angry with her boss Bernard for the way he gives in to her. As she verbally attacks him, he calmly shoots down her Orion’s Belt theory and cautions against getting too caught up in ‘real’ Host behaviour. It’s an echo of the speech Ford gave him in The Stray, and obviously a bit rich for a man who’s tinkering with Host behaviour to make them more realistic. Side note; the Host with the smashed head working its jaw back and forth is probably my favourite gory tableaux yet.

Meanwhile, William wants to take Dolores back to Sweetwater while Logan would prefer to shoot her and get on with his fun, which prompts the brilliant response: “Will you please stop trying to either kill or fuck everything”. Logan thinks it’s no coincidence that Dolores has dropped into William’s lap on his adventure, but we know it has more to do with her ‘awakening’ than anything else. She’s seriously off-loop.

Here we find out a bit more about Logan’s rich family and what role they may play in Westworld. Previously, all we’ve known is that William is marrying Logan’s sister, but he now suggests that his family should up their stake in the Park, hinting that they’re already involved. Is his Dad on the board? Are Logan and William more than just guests in the story of Westworld?

They decide to take Dolores along for the ride, and she seems content to accompany them while she works out what her new path is. She’s remembering almost everything now - her father isn’t back home waiting for her, he died last night. William and Logan’s bandit-catching story takes them very close to the path of the Man in Black and for one moment you think Dolores is close to finding her way to the maze, but the episode ends with William and Logan going their separate ways after an argument about “going black hat”.

The Man in Black is back this episode and just as entertaining as ever. He’s still chasing the maze and closing in on the Snake, as the Reddit community posited ages ago, it is indeed the tattoo on the neck of Armistice, and the two most badass characters in Westworld make a brilliant combo. (“How in Hell have we never met,” laughs MiB. “A really terrible oversight on my part”).

He wants the story behind the tattoo and she wants to break Hector out of prison, so the MiB does the job for her, but not before invoking the story of Arnold. He tells the tale of a man who created a world where you could do anything you like except die, making sure it would be nothing more than an elaborate game. The Man in Black believes Arnold had one last story left to tell, hinting that whatever he’s searching for in the maze will unleash a story with real violence and real stakes.

The jailbreak is less thrilling than you would expect - Westworld’s lack of jeopardy for the humans is a problem touched on within the show itself by the guests, but that is reflected in the wild west shoot-em-up sections too. But hold on: here’s a Westworld-workings gem. As MiB lights his exploding cigar we cut back to the operations room, who have received a request for a low yield pyrotechnic effect for approval, he gets the ok and takes out the lock on the jail door and the jailer's face in spectacularly gory fashion.

Now we get to hear the snake tattoo story. It’s basically Armistice’s revenge markings for a childhood trauma visited on her by a group of men headed up by none other than Wyatt. Which means that the MiB’s maze, Bernard’s task for Delores, and Ford’s mysterious new narrative (he gave Teddy the Wyatt backstory in The Stray) all appear to be the same track.

Ford is up to his usual standard in this episode, illustrating his god-like powers to Cullen over lunch and making it clear that he will not be beholden to her or the board. Hopkins’ performance is phenomenal here. Understated, mild and yet as threatening and manipulative as anything he’s played elsewhere; this speech reminded me of his tour-de-force Hannibal Lecter in Silence of the Lambs. As he urges Cullen not interfere, the giant diggers/metaphors appear over the horizon tearing down everything in their path. “I’m not the sentimental type,” he tells her.

Finally, Maeve’s path to finding out what’s causing her dissonance gives us a thrilling finale, as she pairs up with Hector. She believed that the bullet that ‘killed’ her during a previous story was still inside her, but the unscarred skin told her it couldn’t be true, so she adapted her behaviour to find out what was the truth. And that, as the psychologists would tell you, is one sure fire way to conquer cognitive dissonance.

The Man in Black is famous

“Excuse me sir, I don’t want to intrude, but I just want to say I’m such a fan of yours… your foundation literally saved my sister’s life,” a guest says to the Man in Black. “One more word and I’ll slit your throat - this is my fucking vacation.” He retorts.

It looks like the MiB is clearly somebody significant in the outside world as well, and this blows a lot of fan theories out of the water.

It’s all a game

Logan reminds us all that Westworld is just as really elaborate video game as he swaps his for a better one from a Host he’s just killed, saying: “Upgrade… nice!”

Check out the 7 games you should be playing if you like Westworld.

Anthony Hopkins is drinking red wine when he chillingly reminds Cullen of his power. Can we hazard a guess that it’s a nice Chianti? I think so.

A brilliantly thoughtful episode which is dominated by Ford’s sublime speech and Logan’s, erm... ‘fun’.

Patrick ​is the Editor-in-Chief and founder of TechRadar. In an earlier life he wrote about football for a living and is very proud that his career has allowed him to cover an iPhone queue, write about a World Cup final, and live blog a Harry Potter book. He watches more television than he should.
See comments