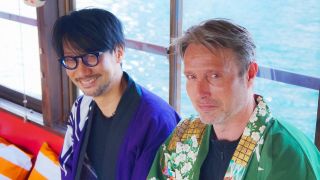 Hideo Kojima knows how to treat a guest right. When actor Mads Mikkelsen - who plays a sinister figure umbilically connected to a squad of skeletal soldiers in Death Stranding - came to visit the studio, the pair went on the best non-romantic date ever. Well, I shouldn't assume, but they didn't post any pictures of them necking after their sukiyaki or anything.

Here they are in their special dining wear. Look at that gleeful smile on Kojima. It's adorable, even if it does seem to worry Mads a bit.

Every good date involves a stop at the company gift shop to pick up some commemorative phone cases...

… and getting drawn by the same person who designed frickin' Solid Snake and Metal Gear Rex. Dammit, I want a Yoji Shinkawa portrait - how do I get cast in Death Stranding?!

Then they went out for sushi and sake and probably another phone case or two.

Of course, no evening with Kojima and Mads is complete without a bunch of fanart. Can bromance bloom, even on the battlefield?