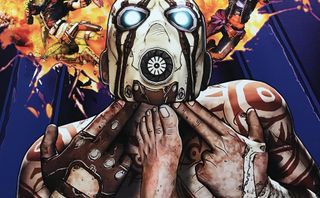 Borderlands 3's box art is a delightfully extra way to present a game that's clearly drunk on itself, but it wasn't always the glamorous, almost dogmatic scene we see today. As Gearbox revealed at a San Diego Comic-Con display titled the Museum of Mayhem, Borderlands 3's box art went through several iterations, many of them every bit as ridiculous and meme-y as you'd imagine.

We've got three fingers under the chin, three fingers to the back of the head somehow, and even a dang gun for a head because why not? But as much as I love the riff on "trust nobody, not even yourself," I'm partial to the above art which uses the Psycho's foot as a stand-in for the phantom third finger gun. Picture it: the Psycho arrives on set for the box art photoshoot. He puts one finger gun under his chin, then another, but then he pauses, confused. What now? His eyes dart around in confusion, but then inspiration strikes. He squats down, wrestles his most flexible leg free, and slowly brings his foot up to his chin. The trifecta is finally complete.

I do love the final box art, but I certainly wouldn't have complained if we'd gotten the foot gun version. That said, mostly I'm just glad we didn't wind up with this horrifying infant Psycho:

Box art aside, Borderlands 3 has also had some great trailers - watch the latest one here.