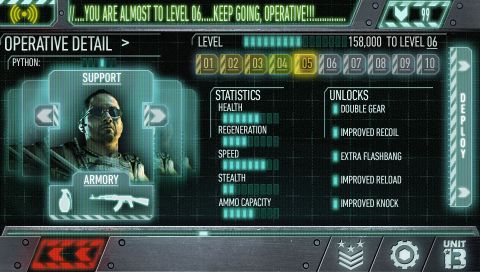 Zipper Entertainment has a reputation for delivering solid shooter experiences to relatively new hardware. Zipper effectively launched the PS2's fledgling online a decade ago with the SOCOM franchise, and now have unleashed their newest IP, Unit 13, on Sony’s Vita to sate the handheld gamer’s hunger for third-person shooters. This entry to the Vita’s launch window provides a solid shooter experience that is broken up into bite-sized chunks and a great experience for gamers looking to dive into commute-time missions.

Players will be taking control of Special Operations soldiers in missions to thwart the terrorist activities of bomb-planting and hostage-taking bad guys while attempting to get the highest mission score. The simplistic story doesn’t dive much deeper than quick mission briefings telling you the bad things terrorists are doing and that you should stop them. On the other hand, it allowed us to jump right into the action.

There are six soldier classes to choose from: the all-around commando, stealthy infiltrator, long-range sniper, machine gun toting gunner, explosives tech, and heavily armored pointman. Each character gets point-multiplier bonuses specific to their specialty. For instance, the infiltrator will be rewarded for getting through a mission without killing guards or being detected, and the gunner will earn more points for any excess bullets that get lodged into a terrorist’s torso.

This element made us change our tactics significantly depending on who we chose to play out the mission. Unit 13's biggest determinants of success are hinged upon three major factors: How you use class-specific score multipliers to rack up a high score, the number of mission stars earned, and how badly you beat out your friends on the leaderboards. Because of those criteria, the scoring system and differentiating character stats force you to approach missions with diverse methods, which also nudge you toward different play styles and skill sets.

On one mission, we felt like Solid Snake as we backstabbed terrorists in an aircraft hangar, but then switched over to embodying Rambo in another as we unloaded gunfire into a crowd of bad guys. Even though we were often visiting the same maps and locations on separate missions, the score-centric gameplay throws enough dynamics into the mix for you to stay engaged.

Unit 13 works well, because Zipper has designed a game that makes all of the functionality easily accessible, from tactical maneuvers to map navigation. It combines the quality of console mechanics with taps and swipes for touchscreen-based reloads and grenade lobs. At times, we accidentally tossed a grenade or zoomed into iron sights while navigating corridors a few times because of the touchscreen icons being so close to the sticks, but it was far less of an issue in this game than what we've seen in several other Vita launch games.

There is plenty to do in Unit 13. In addition to the 36 unlockable solo missions that also have a Dynamic option that switches around enemy and objective locations, the game features online co-op (though only via a Wi-Fi network, not 3G) and access to leaderboards. This almost always works out great in missions in which guns blaze and grenades explode, but we'd advise you to save the stealth missions for link-ups with friends, if you want to enjoy the best of what those objectives have to offer.

With the leaderboards, for every mission completed, players can compare their scores with other players on their friends list, on PSN, or using the Vita’s Near application. Being connected online also provides daily missions, which are like the Dynamic missions in which you have one chance to compete for the best score of the day. All in all, the gameplay doesn’t change in any of the alternate modes (except co-op), but the social pressure provides strong motivation to push for higher scores.

Zipper has really designed Unit 13 to be played based on what you're up to. The game starts players at a mission screen where players can choose between stealth, action, or time based missions of varying lengths. “Short” missions put players in a small map with only a few objectives and can be completed in as little as two minutes while “Long” missions feel more like multiple “Short” missions strung together and could easily last ten to twenty.

Aside from the gameplay, we felt that this feature was one of the most attractive and makes the game truly mobile. While many other Vita titles try too desperately to shoehorn a console game into a smaller system, Zipper is highly conscious of how system owners will likely play this game (ie: probably not in the living room, where a PS3 is more likely to get attention). Whenever there was a free minute or two, we could easily jump into a short mission, try to beat a high score, or unlock a new weapon attachment and feel pretty accomplished after we returned to answering emails at the office. On the other hand, when we had more time on our hands, a jaunt through the more complicated missions and upgrading our operatives were equally as entertaining in their own right.

There's a real attention to quality and portability that Zipper has put into Unit 13. From gameplay that combines the Vita's new touchscreen tech with the tight controls and solid gameplay of the best games in the SOCOM series to missions time-designed around commuting gamers and airport dwellers alike. The integration of both bite-sized missions, online co-op, and downloadable daily challenges to a stout formular of variable missions and multiple classes makes this one a winner. Handheld shooters can be a risky proposition, but Unit 13 takes the gamble and truly comes out ahead.