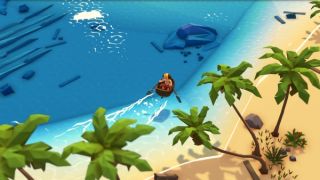 The farming genre is getting pretty crowded. Outside Harvest Moon and Stardew Valley, the former and current kings of in-game farm management, plenty of other developers have been getting in on the simple fun.

Stranded Sails: Explorers of the Cursed Islands, developed Lemonbomb Entertainment, is another entry into the genre. It's coming to PlayStation 4, Xbox One, PC and Nintendo Switch in October. You can check out the announcement trailer below.

Stranded Sails has you running your own farm to feed survivors, exploring the island itself during quests, and survive multiple islands over the course of an overarching story. You can also build and explore via boat, something new to this type of game. The official announcement also mentions fighting against the "supernatural," but we don't know what that means yet.

The tilt-shift style visuals are gorgeous and easily eclipse the pixel and chibi centered art styles for other farming games like this. There is going to be quite the competition this fall with Natsume bringing a new Harvest Moon to consoles, a remake of Harvest Moon: Friends of Mineral town coming to Switch, and Stranded Sails all on the horizon. Heck, Animal Crossing: New Horizons has some similar elements as well.

Stranded Sails, which had been previously announced for PC, has racked up more than 75,000 wishlists on Steam. Here's hoping it lives up to the excitement.

If you're eager for more agricultural escapades, check out our review of My Time at Portia or check out 11 games like Stardew Valley.