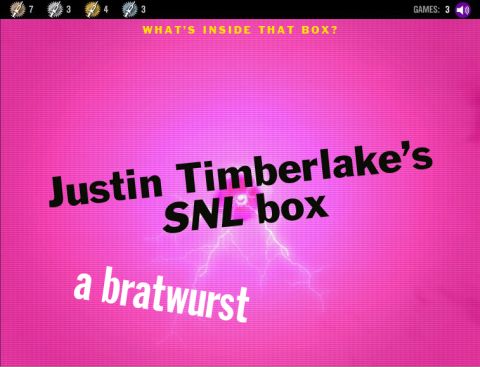 You Don't Know Jack has always set itself apart from the minigame glutted party genre by appealing more to the spiked-punch party crowd, not the sticky-fingered cake-and-ice cream crowd. In other words, the self-proclaimed "irreverent trivia party game" series has always been designed with grown-ups at actual parties in mind - or at least the sort of adults in the late '90s whose idea of a great time was crowding around the PC with the screaming-new CD-ROM drive. To those in the know, YDKJ's sassiness and multiple-choice questions relying equally on street and/or book smarts ("If Sybil has 17 multiple personalities, how many exemptions is she entitled to on a W-4?") was unparalleled. As such, it's not only remarkable that after an 11-year absence the snarky series is back, but it's back just as strong as it was in its heyday.

That's due in large part to the fact that the core game is largely unchanged, though noticeably brisker in pace. Up to four contestants face off against each other in a series of questions, though instead of being given the choice of seven- or 21-question games, players are now relegated to 11-question games about high- and low-brow trivia. Each game is broken out into two five-question rounds and draws to a close with a tense lightning-round Jack Attack.

That swifter pace is undoubtedly due to the series' stampede to the home consoles. Devotees will likely be thumbing around the barebones menus to find the ability to switch on longer games, but that option simply doesn't exist. That, and YDKJ now being exclusive to multiple-choice answers - gone are questions where you supply your own answer - is sure to momentarily confuse, disappoint, and then be adapted to. It’s a minor gripe, but so be it.

Also new is the welcome addition of the Wrong Answer of the Game, which almost always rewards a game-changing amount of cash to the idiot lucky enough to choose it. There is some strategy involved with finding these, since the answers are thematically linked to each game's sponsor mentioned before the episode starts. So, for example, in the game sponsored by Supreme Court Children's Hospital, eagle-eyed players should watch for incorrect answers clearly inspired by that goofy product.

The only other new major wrinkle on YDKJ is it does away with forcing players to buzz in to chuck in their answer. Instead, everyone is able to chuck in their guess as soon as they think they know - and Cookie will tease each player in succession before penalizing or shelling out the appropriate amount of cash based on how quickly the answer was registered. It sounds minor, but it smartly prevents blowouts.

As always, multiplayer is where YDKJ truly shines. You can play it single-player, but doing so not only reeks of being a lonely loser, but it also saps the game's energy by cutting out its competitive side. Same-room multiplayer is preferable, though, because although voice-chat is available, it's a pale simulation for the trash-talk and shameless braying that occurs as a single 15-minute game turns into a whole evening.

What makes it so easy to sink an entire evening into YDKJ is the strength of its material, regardless of the series' lengthy absence. Contemporary pop-culture trends like Twitter are affably indulged in questions, but not excessively. Being asked to differentiate between tweets from Taylor Swift and the Dalai Lama ("Others have the right to happiness, just like yourself"; "Japan is amazing") is on par with the unpredictable questions present in previous iterations. Instead of coming across as being self-consciously current, or a "You Don't Know Jack for 2011," this instead is clearly a You Don't Know Jack that just so happened to be released in 2011. With 73 episodes to play, YDKJ offers considerable shelf time before you start unintentionally memorizing answers. Fortunately, four extra packs with 10 episodes each will be available via DLC - maybe mention on your next e-vite you'll be passing around a bucket for donations.