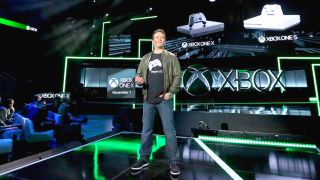 It’s that time of year again: video game Christmas, otherwise known as E3. It’s all about new games, announcements and trailers. There’ll be a lot of E3 2018 games overall, but what has Microsoft got planned for Xbox One?

Some things are almost certain, like Crackdown 3 for example. But other stuff is more open. Will the rumoured Fable 4 make an appearance? We know Cyberpunk 2077 will be shown in some way this year, but will it be on Microsoft's stage? Let’s take a look at what’s on the way, and what surprises might be in store with all the Xbox E3 rumors.

When is the Xbox E3 conference?

Where can I watch the Xbox E3 conference?

As always the show will be livestreamed, so Xbox’s Twitch channel is probably your best bet, along with the Xbox YouTube channel. Xbox’s own Mixer platform is also an option. Both Xbox’s Twitter and Facebook pages will also likely have streams and links as well, but don’t expect to see much there until closer to the date.

Crackdown 3: Currently Crackdown 3 is Microsoft’s biggest game - a first party exclusive and a chance to really show what the Xbox One X can do. It’s currently got a very general ‘Fall 2018’ release date, having originally been delayed from 2016 and then rescheduled as an Xbox One X launch title in 2017. It’s evolved a lot over that time with changes to a cloud-based physics system that were meant to offer citywide destruction, which lead to separation of its single player and multiplayer components. After the delays and alterations expect Microsoft to to make a big fuss, and feature this predominantly as the next big Xbox release.

Forza Horizon 4: While not officially stated outright, Forza Horizon 4, has been accidentally confirmed thanks to the head of Xbox in Spain and Portugal, Fernanda Delgado, who accidently said in an interview, “there have been many speculations about where the next Forza Horizon will be and that is what we will tell later at E3.” The game’s existence has also been backed up by a leaked Brazillian rating for the game which suggests it’s nearing release - Microsoft might be about to pull a ‘and you can buy it now’ style surprise. Another rumor surrounding the game is that it could be set in the UK, after a bunch of British cars were found in an April update to Forza 7. Previously, Forza 6 added a selection of Australian cars, mirroring the then to be announced Forza Horizon 3 setting.

Sea of Thieves: Okay, it's already out, but as an online game with long term ambitions expect to see both Microsoft and Rare making big promises for the future. Whether it’s a full on expansion, or a more organic evolution of content and features - especially after generally warm reviews all criticised its lack of content. We already know about the first few updates - The Hungering Deep, Cursed Sails and Forsaken Shores - but expect some larger scale plans to be revealed.

Ori and the Will of the Wisps: As an Xbox exclusive this is all but a given at this year’s show, following the announcement last year. Expect to see more of its Metroidvania gameplay explained and, given it’s a first party Xbox One Enhanced game, expect the fantasy led visuals to push the pretty as hard as it possibly can.

Something from Capcom: While we don’t know what yet, Capcom has one listing for an Xbox One “Action/Adventure” game on the official E3 Expo site. The only other listings under that genre are for PC and Nintendo Switch. Xbox boss Phil Spencer has been tweeting about working with Japanese developers, and JRPs in general so that could be a clue where this is going. But Capcom also has that Resident Evil 2 Remake in production and there's likely a Resident Evil 8 on the way after the success of Resi 7.

Anthem: After making its big reveal at Microsoft's 2017 E3 show expect the multiplatform Anthem game to return. It’s an EA title so also on PS4 and PC, but Microsoft used it as a showcase for the power of Xbox One X and we’ve not seen much more since. Expect more gameplay and more X-yness at Microsoft’s E3 show as we see more of the Destiny-like co-op shooter in action.

Metro Exodus: The latest Metro game was revealed at last year’s Xbox E3 show as another demonstration of Xbox One X’s power. That time we got little more than a teaser and a sizzle reel so expect a deeper dive this time explaining more about Metro Exodus’ post-apocalyptic shooter world. It is a multiformat game, but one that Microsoft clearly want to claim as their own so expect a continuation of last year’s prominent placement.

Fable: Don’t expect too see much, but multiple industry sources have pointed to UK developer Playground, better known for the Forza Horizon game series, working on a new Fable. The game is reported to be early in development, hence unlikely have much to show, but a CG announcement could be every likely indeed. Rumours suggest Fable 4 will continue the series’ fairytale RPG stylings and be developed by a newly set up Playground studio that’s been staffing up this year to enter full production.

Cyberpunk 2077: There are a lot of rumours floating around that Cyberpunk 2077 will be at E3 2018 in a big way. Developer CD Projekt Red is simply saying it hasn’t announced anything yet, rather than issuing any outright confirmation or denial. The Witcher 2 was a big game for Xbox so the two have a had a good relationship in the past, and levering a little Xbox conference attention to boost a new IP’s profile would be a sensible move for the studio.

Remedy’s Project 7: After two Xbox exclusives with Alan Wake and Quantum Break, Remedy’s next game, codename Project 7, is going multiformat with publisher 505. It’s definitely being revealed at this year’s E3 though, and given the studio’s friendship with Microsoft there’s no reason why it couldn’t push its new game out under a main conference spotlight. All we know so far is that Project 7 will be some sort of cinematic third-person action title, which is basically what Remedy does best.

Borderlands 3: We know it’s coming - from Gearbox studiohead Randy Pitchford’s twitter chats with Elon Musk about including his Boring Company Flamethrower in Borderlands 3, to a PAX West panel comment from PItchford that most of the Gearbox studio is “working on the thing I think most of you guys want us to be working on.” So, yeah, it’s coming and an MS reveal seems like a good combination. There had been rumours that Gearbox and Microsoft had signed a deal for advertising but that’s currently unsubstantiated.

Halo 6: 343 has said they’re working on it, so it exists, but it’s also said to now expect to hear about it for “quite some time” according to 343's Jeff Easterling. Just in case you’re not convinced Easterling clarified that if we do hear anything about Halo 6 “it won’t be soon”. Buuut that doesn’t mean MS couldn’t sneak out some sort of teaser if it really wanted a add a little bang to the show.

So that’s our predictions for Xbox’s E3 2018 based on everything we know. Do you have an thoughts on what might appear? Or anything you just really want to see? Leave a comment if that’s the case and we’ll see what happens on June 10.