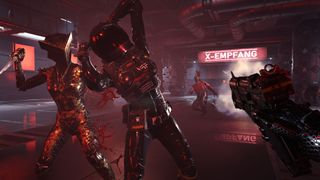 The Blaskowicz family are back and ready to take on Nazi-occupied Paris in a neon-hued detour to the 1980s. To survive, you’re going to want to peruse our 11 Wolfenstein: Youngblood tips so you know what you’re up against. Indulge us as we run through some top tips and pointers to make sure you don’t fall foul of the game’s complex systems when you embark on this adventure solo (or with a friend in tow!)

Throwing Knives in Wolfenstein: Youngblood consistently deal tons of damage and it only gets better as you push through the game and unlock extra abilities. Even without the fully maxed-out Throwing Knife perk, I found myself using them to kill organic enemies in one or two throws even at Level 35+, which is ridiculous when you consider how spongy some of the enemies become as you progress through the levels. Just make sure you pick them back up once you’ve thrown them, a process you should have in your muscle memory from other Bethesda RPGs. Basic melee attacks are also strangely powerful, so if you’re in a bind and you’re up close and personal… go for it!

Once you get a few hours into the game, Abby at the Catacombs will open up her to-do list, which is basically an ambient mission generator. You can accept daily or weekly challenges to complete, and you may as well pick them up as early as possible so you can get to work. Most of them unlock without you thinking about it, but make sure you check every now and then and put emphasis on using the corresponding weapon or seeking out certain enemies to rack up the tally and rake in those precious globs of experience. It adds up fast, and through the menu you can replay old missions to grab big pots of XP if you’re on the cusp of a level.

3. Use your Acrobatic skill

Don’t ignore your nimble nature in Wolfenstein: Youngblood. Jess and Soph have a fantastic Dishonored-esque double jump in their arsenal, which you should use when you’re platforming, but you should also think about how it applies in battle. I found myself leaping up to dodge enemy lasers and gunfire. Diverting their gaze is easy when you leap, slide and dash (there’s an ability that lets you perform a quick dodge) and it makes escaping certain death much easier when the Nazis put pressure on or you’re surrounded. Climb up walls and hide behind architecture, then leap out and stomp on some fascists by jumping and pressing Circle/B. Leverage your skills in acrobatics to take a much-needed breather from gunfire. If you don’t you’re a sitting duck!

Given that it’s trapped in an awkward button placement on the D-Pad, it can be hard to pull off a pep bonus in the heat of battle, especially if you’re not the most dextrous of beings. However, they are absolutely essential to your survival, especially when you’re in grave danger. Save up when you’re starting out to get one of the better pep signals - pick one that fills out your health or armour gauge - and tap it when you’re near death to be restored to health. It’s easier when you think about them as life-saving abilities with a quick cooldown. You can also assign signals to the opposite sister if you’re playing solo. I gave Soph double damage early so I’d get a random bump of chaotic damage when tearing into groups of Nazis with my rifle. As you can imagine, it was super effective.

5. Use the solo AI to your advantage

Jess or Soph will warp to your person if you try to open a door or pop open a shared life crate when playing solo, and you can use that to move them out of harm’s way if they’re in danger or quickly get past an objective that you’re struggling with by forcing the door open. Youngblood can border on unfair with its enemy spawn rates at times - fight back a little by cheesing the AI when you need to! They’re also super capable on their own, so don't be afraid of playing solo if you need to. Just be warned, they can suck at picking you up if you’re on a different platform or floor to them.

Often you’ll get into scrapes where you’re down on your knees and your sister is about to die too. It can feel like the end is nigh, but to preempt imminent death and a subsequent game over, there is merit in bleeding out post-haste so you can use your shared life and revive your sister whilst they’re still down. In this case, you’d burn a life to save one, but it’s either that or you’re both dead and you have to start the level over again. Given that checkpointing can be quite brutal - it’s always worthwhile to utilise this tactic if you’re knocking on death’s door.

7. Be frugal with your ability points

Waste not, want not as they say - the same goes for ability points in Youngblood. Scope out the trees in the game for the abilities that really matter - consult our best abilities guide for some pointers there. Often the best skills are gated behind some silly arbitrary ones that cost a point or two, so it's worthwhile spending a few to get access to a better skill later down the line. Try and stay focused on your build too - once you find a style of play you enjoy gun for skills that complement that - perhaps upgrade the stealth power Cloak over Crush if that’s your approach - and make sure you save your points for when new tiers unlock at levels 10, 20 and 30.

One of the key combat modifiers in Youngblood is the existence of two discrete ammo types depending on what gun you’re using - and don't worry these extend outside of your starting lineup of rifles. You want to upgrade one weapon for each ammo type so you can deal potent barrier damage early on and get rid of problems before they become overwhelming. This should come naturally, but really don’t bother trying to use shotgun ammo against the massive laser soldiers who require rifle bullets to break their shields. The game really wants you to buy into this aspect of its gunplay, and it won’t let up unless you waste all of your ammo!

One interesting part of the upgrade systems in Youngblood is that the weapon mods are branded and can be combined to create a set. Nadel is all about accuracy, Tempo is concerned with fire rate and Stier is a one-way-ticket to damage. Don’t ignore these when you’re fixing up your favourite weapon! For example, if you like the scoped rifle, you can mod it into the Nadel tree to add penetration and higher headshot damage at the cost of a low fire rate. Do some research before you spend all of those silver coins on whatever looks the best!

10. Visit the catacombs regularly for side quests

Outside of levelling up, the only way to reliably gain ability points is to do side missions, and given that some abilities are more important than XP, you want to do as many side quests as feasibly possible at the start to get you geared up and feeling dangerous. Visit the catacombs after your first mission out and make a habit of clearing out areas, doing as many as quests as possible before you head back and turn them in for gigantic XP boosts. Repeat ad nauseum until you’re moving on to the more dangerous side quests and you should level up in no time, giving you access to better abilities and the points to unlock them.

11. Pick up both main abilities early

This is so crucial - puzzles will often require you to use Crush, but you picked Cloak! And your AI partner refuses to follow commands. Save up five points right at the start to grab a simple point in Crush or Cloak to fleece out your arsenal with an extra skill. This is far better than any ability upgrade you can pick up at the start, and it means you can be totally versatile early on - you won't need to rely on your partner for much beyond opening doors!