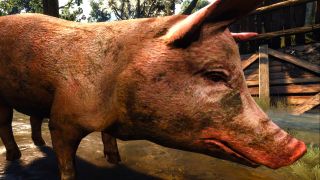 The Witcher 3 remains a beautiful game even four years after its release date, but even masterpieces need retouching every now and then. That's exactly what The Witcher 3 HD Reworked Project Reborn does: it retouches The Witcher 3 with sharper visuals that still feel true and consistent to the original vision for the game.

What I'm trying to say is that this is isn't one of those mods that turns everybody into a cute anime girl and you have to admire the craftsmanship on display but eventually turn the mod off for fear that the girls' giant, lifeless eyes will penetrate your Absolute Terror Field and suck out your soul.

Sorry, what was I talking about? Right, The Witcher 3 HD Reworked Project Reborn. As the extensive name suggests, this mod has been around for a while, but it just got its tenth version this week. This latest iteration is focused on environmental changes, giving new detail and clarity to everything from grassy terrain to flagstone buildings to gutted deer strung up behind hunters' houses. The mod makes some changes to characters as well, though for the most part they don't need quite as much work to look nice in 2019.

Best of all, these improved visuals shouldn't come with too much of a performance hit if you have a decent modern video card. The creator recommends using a card with at least 4GB of VRAM and says that the mod may decrease your framerate by up to 5 FPS depending on your other settings and conditions, though it could also create smoother performance in some circumstances.

If CD Projekt Red's next game follows a similar path, I look forward to writing about mods for visually authentic rusty panels and computer cabling in Cyberpunk 2077 five years from now.

Stay tuned for more developments this weekend with our San Diego Comic-Con 2019 schedule.