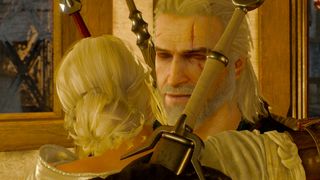 The Witcher 3 good ending is obviously only one of the possible Witcher 3 endings. It's also not easy to get first time unless you check, because it involves occasionally making what feels like bad decisions at points that might not immediately appear important. Whether you want to know how to get it, or just check out the options, we've got you covered here as we dive into the main ways the game can conclude.

There are actually 36 unique end scenarios if you take into account all the different things you can do throughout the whole game, but that number covers side mission outcomes and other less important decisions. In terms of the big final ending there are three main outcomes you can get in the The Witcher 3. If you want to know what they are, or how to get them, then read on as we cover them all.

Major spoilers below for The Witcher 3: The Wild Hunt

The most important aspect of The Witcher 3’s ending revolves entirely around Ciri. After spending the majority of the game desperately searching for the Lion Cub of Cintra, Geralt is eventually reunited with his adopted daughter, but not under ideal circumstances. The spectral parade of elves known as the Wild Hunt - specifically Eredin Breacc Glas’ Red Riders - are still trailing her, eager to capture her and exploit her awesome abilities to influence space and time. Once Geralt rescues Ciri from the evanescent Isle of Mists, Geralt brings her back to Kaer Morhen and you can significantly influence part of the ending.

The determinants for Ciri’s fate occur in Act II and Act III, and come into play shortly after the game provides you with a point-of-no-return prompt. The first decision you’ll have to make is tied to cheering a disheartened Ciri up. Here you’ll have two options: bring her into the keep for a drink, or challenge her to a good, old-fashioned snowball fight. Choosing the former option - “Tell Ciri she doesn't have to be good at everything” - fails to cheer her up and negatively influences her fate. However, telling Ciri you know what “might lift her spirits” sees Geralt playfully hurl a snowball at her, triggering the true battle of Kaer Morhen and providing Ciri with some momentary respite from her woes. This counts as a point towards Ciri’s good ending.

Later on, you’ll have a choice to either bring Ciri to meet her father, Emhyr var Emreis, or go straight to Velen. Choosing to bring her to Emhyr actually has another weighted decision within it, too. If you escort her to Nilfgaard, you’ll be offered a reward. Accepting it and accumulating enough positive points to keep Ciri alive will cause her to become Empress at the end of the game, and counts as a negative point. Although refusing the reward still causes her to go into diplomacy, it counts as a positive point, at least. However, simply skipping Emhyr entirely and proceeding straight to Velen counts towards what most fans consider to be the best possible ending in The Witcher 3: Ciri becoming a witcher. Obviously, this also counts as a positive point.

There are three more critical decisions in the game’s third and final act. The first has to do with Ciri’s journey to visit the Lodge of Sorceresses. Although deciding to go with her may seem to be ostensibly supportive, doing so causes Ciri’s confidence to take a hit and a negative point is added to the tally. Encouraging her to go alone, however, makes a positive impact, producing a positive point to boot.

Shortly afterwards Geralt and Ciri venture to Avallac’h’s lab. Ciri, furious with the Aen Elle Sage for meddling with her life, wants to wreck the place in revenge. Telling her to calm down leads to the same outcome of accompanying her to the Lodge: knocked confidence. Negative point. However, indulging her affords her the catharsis she needs and allows for some father/daughter bonding/vandalism. It’s touching in the same way the snowball fight is, except it’s a little bit more rebelliously inclined. Positive point.

The last major decision you’ll have to make in relation to Ciri’s fate involves Skjall, the late young man she befriended in Skellige. If Geralt visits his grave alongside her, Ciri will pay her respects and discover a newfound resolve. Positive point. Obviously telling her that there’s no time to grieve for her friend in a game where you play cards while you’re supposed to be searching for your long-lost daughter begets a negative point.

For Ciri to stay alive, you’ll need to rack up at least three positive points. If you get any less, she vanishes from the game with the implication that she’s dead. So once you get enough positives, there are two possible options: Ciri becomes the Empress, or Ciri becomes a witcher. For the former, you need to visit Emhyr while completing Blood on the Battlefield, the quest where you avenge Vesemir by killing Imlerith. You’ve also got to ensure that Radovid and Dijkstra are both dead, which allows for Emhyr to win the war.

Most people prefer Ciri following in Geralt’s footsteps and becoming a witcher. Once you don’t bring her to meet Emhyr and obtain at least three positive points, you’ll be treated to the third variant of The Witcher’s “Something Ends, Something Begins” quest, which wonderfully wraps up Geralt’s and Ciri’s intertwined stories. That’s not the end though. If you play through Blood and Wine after completing the game without romancing anybody, Ciri comes to visit Geralt in his new Toussaintian vineyard.

How to get the best ending for Ciri

Unfortunately, some things are set in stone. Losing Vesemir is what ultimately gives Ciri the resolve to see her journey through, so there’s no way to reverse that. You can, however, make sure she honors his legacy by walking in his footsteps. Just get three positive points and make sure to ghost Emhyr.

What happen's to Geralt in the Witcher 3 ending?

Geralt’s official ending is determined by who he romances — he either remains a witcher, retires in Kovir with Triss, or elopes with Yennefer, far away from the grisly world of witchering. Or did he decide to eschew romance for a more solitary existence? This also determines who visits your vineyard in Toussaint. (If Ciri dies and you didn’t romance anybody, Dandelion will show up)

In terms of the whole 36 scenarios, most are just to do with individual character arcs. What happened to Sigi Dijkstra? Did the Bloody Baron manage to find the Anna he knew and loved? And what about the Whispering Hillock? These are pretty minor in relation to the main conditions of the ending, which, aside from Ciri’s fate, are based on the following:

Who wins the war? The three possibilities here are Emhyr, Radovid, and Dijkstra, and this is primarily determined by the Reason of State questline (which is one of the best in the game).

Who becomes the ruler of Skellige? It’s either Cerys, Hjalmar, or Svanrige. Svanrige only becomes King if you don’t complete the An Craite questline, which would be a silly thing to do because it’s excellent. As for Cerys and Hjalmar, you literally get to choose who takes the throne.

If you manage to keep Ciri alive, the rest is all down to personal preference, and it’s pretty easy to line up the conditions you’re after. Choose a side in the war, decide who’s best for Skelligan rule, and ponder the meaning of true love. Make sure to look out for your pals along the way — looking at you, Thaler — and you’ll likely end up with a world state tailored to your exact desires.