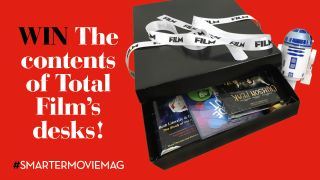 We’ve got stacks of geeky film prizes to give away! To be in with a chance of winning, all you need to do is show us the smartest way you use your Total Film magazine.

Total Film magazine has recently had a makeover. The all-new and improved TF - packed with smarter movie coverage - is on sale now, and to celebrate we’re giving you the chance to win some awesome prizes.

The Total Film team have raided their desks in search of movie-related goodies and will be giving away one huge bundle of film prizes – to one lucky winner.

To enter, all you need to do is tweet us – or tag us in – a photo demonstrating the smartest use of Total Film with your very own copy of the latest magazine.

The top photo will win a selection of film prizes including the following:

1. Photos must feature a copy of Total Film

All posts which meet the above criteria will be judged , by the Total Film team and an independent adjudicator, who will pick their favourite photo.

Don’t miss the all-new Total Film magazine – on sale now in all good newsagents or available to order here. Or get this great special offer and get 3 issues for £5.

By taking part in this competition, you agree to be bound by the terms and conditions below, as well as the Competition Rules: http://www.futureplc.com/competition-rules/.

By entering this competition, you give Future and its licensees the right, free of charge, to republish your entry for any purpose.

The prize winners will be chosen by the judging panel in their absolute discretion from all entries from the people who meet the above ‘Criteria’. The judges’ decision is final and no correspondence will be entered into. Entries will be judged Tuesday 12 July.

There will be one (1) prize bundle, details of which will be announced on the day of the ‘Editor’s Giveaway’.

The competition closes at 3pm (BST) 11 July 2016. Entries entered after 3pm may not be counted.

There is no cash alternative.