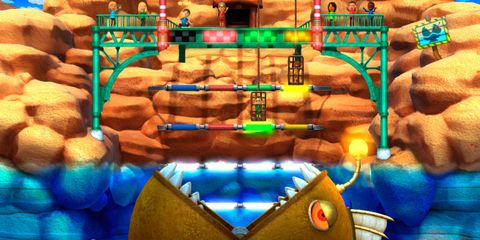 Wii Party U, like Wii Party before it, is essentially Mario Party minus the personality and pizazz. Its Mii-centric cast brings with it a slew of new minigames and modes that make the best of what the Wii U has to offer, tapping into GamePad's unique functionality in addition to the same old Wii Remote motions you're no doubt familiar with. Though Wii Party U sometimes dips its feet into the realm of tedium, its 80+ minigames and a few neat GamePad exclusive modes mean you can definitely expect to have some good times.

Wii Party U doesn’t so much focus on the traditional board game aspect like most other party titles (though they certainly exist here as well) as it does on the variety of minigames it offers. A huge number of them are available to play right away, ranging from four-player free-for-alls to team-based matches. All require the use of a Wii Remote, but each one comes with its own set of rules and controls that utilize the controller in different ways. Considering the Wii’s been out for a while now, these games don’t show off anything new about the Wii Remote: Shake it, point it at the screen, tap some buttons--it’s all been done before, but this simplicity fits nicely with its casual setting.

What could have used some work, though, is the game’s presentation, which still looks as bland as it did in the original, albeit with a fresh HD coat of paint. Wii Party U tries to inject some life into its minigames and game modes by providing colorful backdrops and your own population of Miis, but there’s nothing particularly special about them that will draw you in. Instead, they--in addition to the soundtrack--are easily forgettable.

Despite its simplistic controls and presentation, Wii Party U offers a great degree of challenge that makes for some friendly competition. Some minigames require quick reflexes when making selections, like in a game of musical chairs, for example, while others test your memorization and counting skills. Only a couple of them rely on luck, so it feels good when you score a victory knowing you actually worked for it. Besides just playing minigames individually, you can also select from a few modes that crown a first-place champion after a set number of wins, adding even more of competitive atmosphere amid all the silliness.

Some games even turn your GamePad into an arcade tabletop machine. Despite utilizing very simple controls (each player uses half of the controller), these bite-sized experiences are impressively designed and let you take a break from the party. Games like Baseball and Foosball can be quite addictive, and the more casual puzzle games challenge you to clear them all. Wii Party U may feel dated in some respects, so these games breathe some life into the series.

Meanwhile, the aforementioned virtual board games offer a more structured party experience. Highway Rollers, for instance, requires you to reach the end of the finish line by rolling the dice to determine the number of steps you can take. The better you do in minigames after each turn, the more dice you’ll get to roll. Though nothing special by any means, this board game is the most enjoyable one as it balances the amount of time you’ll spend rolling dice and playing minigames.

The other two board games induce more yawns than they do laughs simply because they impose excessive rules and victory requirements. GamePad Island, for example, tries so hard to use the GamePad in creative ways, but it does so at the expense of your patience. Each turn requires a player to play a minigame with the GamePad one at a time, meaning you have to sit around and wait when it's not your turn. To make matters worse, the game constantly throws notifications your way to remind you to swap between controllers. You’ll spend more time reading through them and rolling the die than actually playing any games, which gets pretty tiresome and boring.

Not all of GamePad Island is unenjoyable, however. Various 1 vs. 3 minigames successfully showcase the console’s “asymmetrical gameplay,” giving one player a unique perspective on the GamePad while everyone else plays with the Wii Remotes. One game even has everyone using their controllers like ladles and scooping up water from the GamePad screen and transporting it to jugs that appear on the TV. In addition to providing you with a new way to interact with your television, these games are also a great way to interact with everyone around you--and isn’t that the whole point of playing a party game?

Wii Party U’s lackluster presentation and occasionally boring game modes are but hiccups in an otherwise decent party booster. Its impressive GamePad minigames are sure to keep your guests entertained, and will extend the life of the game even after all your friends have gone home. Offering a solid selection of games, modes, and challenges, Wii Party U is a solid addition to anyone’s Wii U library, whether or not you party a lot.