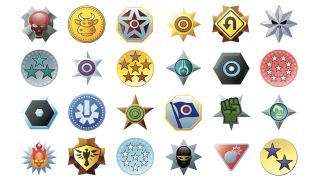 Halo isn’t the only video game series to acknowledge feats of multiplayer excellence via an excitable announcer and a gratifying shower of glittering badges. Unreal Tournament did it first. Call of Duty does it to the power of ten. Halo, though, does it best.

My Halo multiplayer experience has been defined by that post-game awards screen. Recently, I went back to look at my Halo 3 service record, and I could still recall how and when I achieved some of the rarer, and most treasured, ones. Yes, that lone Killtrocity medal was awarded for a game of Grifball, when a fortunate hammerswipe wiped out most of the opposing team, and knocked them out again just as they were respawning. Late 2008, I think it was. I clearly remember how exciting it was to see those medals appear, one after the other, quantifying my four seconds of Halo dominance.

Halo 3 was my game of choice for the best part of two years, and while I was never a world-beater, I could certainly hold my own against middle-ranking players, the honest Level 20–30 ones. The Level 50 bigshots who’d sometimes show up in the lobby… well, they were usually to be avoided, unless it became apparent that their inexplicably low placing on the leaderboard was no fluke. These were the vile boosters – people who’d cheated their way to a high ranking purely as a status symbol. But they’d soon get their comeuppance – after being mobbed during the game, they’d be mocked mercilessly in the lobby afterwards. The ranking system could be manipulated easily enough, but the skills of a genuine Grade 4 General were impossible to fake.

When it came to bragging rights, the post-game medal display was hard to ignore. A player who spends the entire game snatching the sniper rifle as soon as it spawns might be a big annoyance to teammates, but afterwards there would be a number of Sniper Spree medals (or lack thereof) to settle any disputes. I only got four of these in my entire Halo 3 career.

The single-weapon spree awards, which were always some of the hardest to win, marked you out as a genuine specialist. I earned about 300 of the normal Killing Spree medals, for killing five enemies without dying, but only six Sword Sprees and three Shotgun Sprees. My ‘plucky amateur’ playing style was clearly illustrated by the 3,500 Beatdown medals I accumulated, showing that the classic melee was my most effective attack by some considerable distance. While better players were racking up mid-range headshots with the battle rifle, my go-to manoeuvre was to rush an opponent, blasting away with whatever weapon I’d found, until I got close enough to smack them in the face.

My reliance on Halo’s hand-to-hand combat frequently resulted in a simultaneous death for both parties, which isn’t particularly productive in a game of Slayer, but still beats seeing the opposition walk away as all your health points plummet. Despite spending slightly more time on the winning side than the losing one, my kill/death ratio over the course of those two years ended up fairly even. An unofficial stat-tracking website at the time informed me I’d spent more than eight hours waiting to respawn. There was no medal for that.

My favourite maps in all Halo games tend to be ones with wide open spaces and Warthogs to drive, and my favourite award is the Wheelman medal, awarded for competent driving while another player racks up kills from the gunner’s position. It’s a greatly underestimated skill. The glory hunters want the inflated kill count that comes from a successful Warthog gunner’s run, but if the driver isn’t up to scratch, your spree can end quickly and messily. You need someone who knows the best routes through the level, who can avoid hazards and maintain a high speed while presenting a clear line of sight for the gunner.

After getting fed up of jumping onto the back of a Warthog and finding Stevie Wonder behind the wheel again, I decided to make it my business to assume driving responsibility. The player in charge of the shooting would end up with a much higher score than me in the kill charts, but those beautiful yellow Wheelman medals were my badge of honour. If I notched up a few cheeky Splatter awards along the way, that was always a bonus.

Since Halo 3, the medal count has ballooned. Each new game has retained most of the old ones, added dozens of mode-specific new ones and filled in some of the gaps to ensure that it’s essentially impossible to complete a match without being awarded something. There are now hundreds of them, including a different medal for each type of vehicle or enemy you destroy, as well as the rather uninspiring Kill medal, the description for which is simply ‘generic kill’.

This unconstrained bloat threatens to take Halo down the CoD route, to a world where medals are devalued by their abundance. We’re not quite there yet, but the fact that until recently you couldn’t even see another player’s medals at the end of a Halo 5 match suggests it’s not very high on 343’s list of multiplayer essentials.

The original purpose of these awards was to acknowledge exceptional – or exceptionally improbable – performances. We’re moving away from that, somewhat, to a more inclusive future where medals are a means of saying thanks for taking part. But even if half of them are basically hieroglyphic summaries of the score table, there’s still great satisfaction to be had in racking up the ones that really mean something. Skyjacker, Bulltrue, Grenade Stick: I’m looking at you. And Wheelman, my old friend, tonight we shall be reunited.