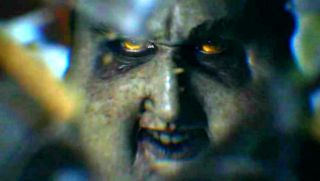 If you’ve been watching Fox’s superhero show Legion you’ll probably be wondering who the yellow-eyed devil is. The demon’s featured heavily in every episode so far and has moved from curious background detail to major player in the unravelling mind and memories of hero David Haller.

This yellow-eyed creature started not arousing too much suspicion initially above all the show's other trippy flourishes. As time’s moved on though we’ve seen it stalk and chase both David and other characters exploring his memories as they try to get to the source of his powers.

There are two main theories currently based on Marvel villains linked to the David Haller’s comic book history, mainly picked because they’re sort of fat and vaguely monstrous. I’ve also picked a third based on some recent developments (so beware of spoilers if you’ve not seen episode 4 or further). All have pros and cons so let’s take a look at the popular candidates.

This Marvel and X-Men villain would be a very meta choice considering he’s from a race of extra dimensional blobs that have built their entire race and culture around TV shows. In the comics, the character Mojo rose to power by filming the X-Men to create programming based on their adventures. The constant questioning of reality in the show, and David’s memories, would certainly fit that idea - an alien from outside our reality manipulating and molding the hero to create high quality shows which we’re watching for entertainment. Like I said, meta. There’s mounting evidence in Legion that the demon is manipulating, shaping or downright fabricating David’s memories to some end. Weird as it all sounds, an entertainment focused agenda would fit that subterfuge quite nicely.

There’s a few problems here though. Mojo’s race are also known as the Spineless Ones because of their literal lack of backbone. In the comics they use floating platforms and exoskeletons to get around, while the character in the TV show clearly has legs. He is a massive shapeless blob through which fits the profile, and a there’s room for a little artistic license.

The Shadow King’s origins in the Marvel universe aren’t clear beyond apparently being born from the ‘first nightmare.’ He’s another multidimensional entity and does have a connection to David Haller in X-Men canon, specifically via Professor X who’s actually David’s father. X clashed with the Shadow King in the form of a human called Amahl Farouk and that battle originally led to Prof forming the X-Men.

However, aside from that, he’s a weaker candidate compared to Mojo. He’s more the ‘world domination’ kind of villain, so his interest in David doesn’t make much sense. He also usually appears human, in the form of a possessed body. It’s possible that he tried to take over David (he has done it in past comic books) but failed, given that David’s meant to be the most powerful mutant alive. If it is the Shadow King, perhaps he’s re-writing and reforming David’s memories in a way to enable him to escape or take over completely.

We’re into longshot territory here because Kinross lacks any resemblance to demons (she's modelled on an X-Men scientist of the same name). But in Legion canon she already has a prior history for creating a reality where David was a hero, a process which includes rewriting his memories and past. That sounds a lot like some of what we’ve seen in the show so far. She’s one of David’s split personalities, taking on the form of a young, brunette woman who functioned as a sort of psychic antibody to protect Haller. Physically, though, she bears a passing resemblance to Lenny, David’s former junkie friend, who - gasp - appeared in episode 4 with the Yellow-Eyed Demon’s hand. The show’s already made a mention to David’s psyche trying to protect itself so it could be possible that the visual appearance of the demon is a red herring.