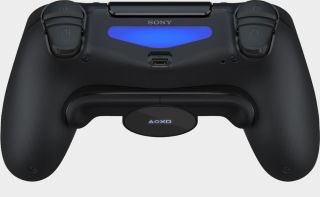 To compete with the highly successful Xbox One Elite 2 Controller, earlier this year Sony hastily revealed and then released a DualShock 4 back button attachment to give PS4 players a quick, cheap way to graft mappable buttons to their controllers. From the moment the attachment was announced in December, pundits and fans have speculated the attachment simply must mean that the PS5 controller will have built-in back buttons and this is some kind of test balloon or attempt to give PS4 controllers parity.

At this point, there’s really no way for spectators like you and I to know whether or not the DualShock 5 will add these buttons (I see no reason not to call it the “DualShock 5” until Sony announces a different name), especially as there are two separate patents for the controller out there already - one with rear inputs and one without. The reported leaked photos don’t show the underside of the controller, so that doesn’t swing things one way or the other.

However, after spending a few weeks with the rear button attachment and holding my breath waiting for Sony to make an announcement to settle things, I think it’s time to play the guessing game. Let’s look at Sony’s odd little end-of-cycle peripheral and see what it may have to say about its first next-gen one.

1. There won't be a rear screen for remapping capabilities

Let’s get the obvious one out of the way. Regardless of whether or not the DualShock 5 has remappable buttons, it will not have an LED screen on the back. There’s no screen in either of the patents and no indication of a back bump on the leaked photo. For there to be rear buttons and a screen on the underside of the controller, there would need to be a significant change to the DualShock shape, so you would see it, even from the front.

So if there’s a DualShock 5 with rear buttons, they are either a) not remappable or b) Sony will integrate remapping software into the PlayStation 5’s operating system - like Microsoft does with its Elite Controllers. If the DualShock 5 is backward-compatible, as indicated by the French PlayStation site last month, it may be possible that the opposite is true and that the back buttons create feature parity between the two. If that’s true, though, then one can assume that the DualShock 5’s buttons will be remappable.

Luckily, it also (hopefully) means that adding these buttons shouldn’t make the DualShock 5 significantly more expensive than its predecessors.

2.  Or any backwards compatibility for the PS4 Back Button Attachment

If the PS5 DualShock 5 does not have back buttons, PS4 owners will most likely be unable to bring their attachments to the next-gen controller. The DualShock 4 attachment connects to the controller via the headphone jack and data port on the bottom of the DualShock 4. None of the patents for the next-gen controller show this same data port, and rumors suggest Sony will rely on USB-C for charging, which could remove the need for it.

This could be taken as a sign that Sony will add buttons to the DualShock 5. It could also simply suggest that Sony will release two or more versions of the next-gen controller, one of which will have rear buttons.

3. The PS5 controller could have rear buttons or triggers

The button design on the proposed DualShock 5 and the PS4 button attachment offer two very different versions of the back button concept. The Japanese patent for the DualShock 5 that features underside buttons shows what appears to be a pair of small triggers placed in a natural spot for your middle fingers, rather the long, wide buttons on the attachment that stretch across the DualShock 4.

If you believe that the attachment is laying the groundwork for the PS5 controller, then it benefits us to say that the patent is incorrect and the DualShock 5 will have buttons, not triggers. It certainly doesn’t hurt that the buttons from the attachment are also a much better design than adding a third pair of triggers. Based on my experience using and reviewing controllers with rear buttons and paddles, including the DualShock 4 attachment and the Xbox Elite Controller Series 2, I think the rear triggers would create more problems than they solve. People hold controllers differently depending on the size of their hands so introducing a back button that forces the fingertips to a specific point on the back of the controller seems like it would be very uncomfortable for anyone whose hands are too small or large for the triggers. Obviously there’s no way to know how it would feel until it’s out in the world, but, on spec, it seems like a step in the wrong direction for a feature conceived, in part, to minimize stress on players’ fingers. On the wider, more ergonomic shape indicated in virtually every rumor about the controller, there will be more room for players to hold the controller comfortably and use the buttons regardless of their grip.

I know there’s a good chance I'll wind up regretting this in the next 30-90 days, but I don’t think there will be rear buttons on the DualShock 5. There may be a “DualShock 5 Pro” or alternate version of the controller with rear buttons, but I think Sony is unlikely to alter the design of the DualShock that much due to a stronger focus on backwards compatibility between PS5 and PS4.

Also, given that players seem more than willing to pay extra for remappable buttons and other premium features, adding rear buttons to the standard controller feels like leaving money on the table, so to speak.