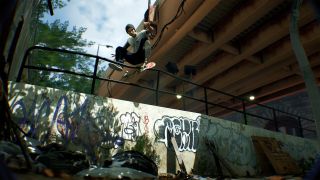 As the lights dimmed at the Hollywood Palladium in Los Angeles for the EA Play 2018 press conference, viewers around the world collectively crossed every opposable digit for an announcement they’d been waiting to hear about for years. There’d been rumours, teases, and even tangible signs of an impending surprise (why else would the Skate 3 servers suddenly boot back up?). The world was telling us that EA’s much-anticipated skateboard sandbox sequel Skate 4 is happening, and everyone was on board for the reveal.

Except… not quite everyone. Marc-Andre Houde,  Vincent Da Silva, and Sebastien Primeau were also crossing their fingers, but for the exact opposite result. In what must have been a strange experience, the pair were sighing with relief at Skate 4’s absence from EA Play, at the exact time when everyone else was shaking their heads in disappointment. Luckily, many of those same Skate fans would receive a pleasant surprise at Microsoft’s E3 press briefing two days later, in which Session, creā-ture Studios’ purist skateboarding sim, debuted a new trailer to announce its arrival on Xbox One and PC later in the year.

“When we saw the EA press conference, and Skate 4 was a no show… yeah, we have to admit it was quite a relief.” explains Houde, creā-ture Studio’s co-founder and Session’s Creative Director. “We were the only people who were actively hoping for Skate 4 not to show up! A part of me would want a new Skate game, sure, but another part of me definitely doesn’t!”

That’s because Session is openly and heavily inspired by EA’s last gen skateboarding series, taking cues from its control system, tone, and design philosophy to pick up where the franchise left off after Skate 3 came and went in 2010. Following a successful Kickstarter campaign last year, the Montreal based creā-ture Studios, made up of Houde, Primeau as Art Director, and Technical Director Vincent Da Silva, has been hard at work preparing to release an Early Access version of the game on Xbox One and PC by the end of the year. PlayStation 4 and Nintendo Switch owners need not worry, though; the game is a timed console exclusive only for the first three months, as Houde explains.

“We’ve been talking with Microsoft for a while, and after the Kickstarter campaign we started to talk more seriously with them, so they came up with an offer to help us deliver the game, which resulted in this timed exclusive deal. After that, we started to think about this idea of being at E3, which was super exciting but also nerve wracking. Going to a place like that when you are such a small developer means you have to stop the machine and focus on the convention alone, which had a negative impact on development.”

The reaction to Session, however, has only escalated in positive buzz since that unexpected appearance on the Xbox E3 stage, proving that there’s clearly still a demand for skating games and sports-action titles in today’s games culture, despite industry executives being more than happy to put them out to pasture. In 2010, the year Skate 3 came out, former EA chief John Riccitiello suggested in a Kotaku interview that “skateboarding seems to have run its course as the representative example in that broader genre [of action sports]”, but Houde disagrees.

I think these kinds of games are a bit like music” he says, when asked about the matter. “There’s genres of music that makes big waves and suddenly disappears for a little time and then comes back, but when you’re really passionate about that genre, it never really dies, it just goes underground. So maybe skateboarding games are the same. Things like the Xbox Briefing shows that it’s not that obscure. The demand is always there.”

Session, formally known as Project Session, intends to be the most realistic take on video game skateboarding yet, evolving Skate 3’s dual stick control scheme to capture the science of the sport with greater fluency and accuracy than any previous Tony Hawk or Skate title. For Primeau, being Art Director, this has involved scouting out real life locations, such as New York City’s Brooklyn Banks, and turning them into interactive playgrounds while maintaining the authenticity of the setting as closely as possible. He calls it a “good problem to have”, and describes the creative process behind bringing these virtual skateparks to life.

“Marc is the skater, so I’m having a lot of fun learning about skate culture, discovering the iconic areas of the 90’s and early 2000’s… there’s so many potential places to add in the game, but what we’re focusing on right now is just a small part of New York. After that we want to expand, and we’re really open to the feedback of the community for possible locations.”

“I’m someone who really loves vibrant colour, so Session won't be awash in grey like skateboarding games used to be. For us, it's important to bring some vibrant colour, strong lighting and so on. It needs to be stylish, yet realistic at the same time.”

Of course, if the team needs more inspiration for building The Brooklyn Banks, their proximity to New York (“just a short six hour drive”) means they can always jump in a car and reacquaint with the scenery once more. The environments aren’t just going to be pretty, either, but alive and ever changing, as cre-āture Studios plans to update maps in real time, literally closing off areas of the skatepark with construction sites to work on them, before unveiling the new and improved changes to the player base when its done. In an era of live services, where Fortnite Battle Royale’s map is never the same on any single week, this is a move that certainly seems to play well with audiences, but it’s also something that’s never been seen before in a game of this kind before.

“We’ve always wanted to have this kind of live and interactive way of building the environment.” says Houde. “It might be gimmicky, but I like the concept of imitating real life with these construction signs and cordoned off areas, rather than literally not showing anything. It’s more visually interesting and hands on, then when the update is complete the first reflex players will have is to go and see it.”

Music to the ears

A big part of skateboarding games, however, has always been the soundtrack. Traditionally, the audio backdrop to the action tends to be steeped in the culture of the time; punk rock, 90’s rap, American emo pop… you get the idea. But that was then, and while Session is definitely inspired by those 90's/2000's “glory days” of the skateboarding scene, Houde wants an eclectic soundtrack that can appeal to all types of players, provided the studio can navigate the perilous waters of music licensing, which he half-sarcastically describes as “a really fun and challenging experience.”

“Sports games have always had the same kind of concept in that you have a big roster of cool bands, you make a big list, and you listen” he tells me. “But Session is a live project, and something that we want to keep building, so the soundtrack will have cycles. We like the concept of radios stations, with a really varied soundtrack. We would like to find ways to come up with some really cool and meaningful music choices; blues, jazz, hip hop, punk... we just want to make sure that it pleases a super wide range of folks.”

Of course, you can’t talk about Session with referring to the giant EAlphant in the room, and creā-ture Studios is very aware that it’s got an uphill battle ahead as it seeks to escape the shadow of the Skate franchise. Houde remains optimistic, though, and his parting thoughts about Session’s incoming impact reveals a love for the genre that trumps any potential fears or jealousies about reductive comparisons to Skate.

“The more we work on Session, the more its identity grows, and at some point we’d like to be considered as our own thing and not a just spiritual successor. We still have a lot to prove, but if our game encourages other studios to make skate games again that would be amazing... we shouldn’t be the only ones. We’re focused on the hardcore sim, but there’s so many other ways to approach skateboarding. I’m excited for the genre’s future again!”