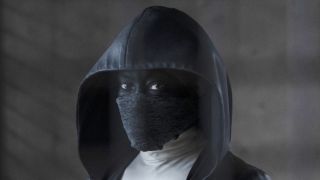 You’re probably still recovering from the final moments of Watchmen episode 7. I’ll give you a minute. “An Almost Religious Awe” didn’t so much as flip the HBO series on its head as completely rewrite the rules of the universe. With one moment, everything changed. Showrunner Damon Lindelof has revealed the origins behind the idea, while also confirming that one major character from the comics won’t be returning in the show.

**Spoilers for Watchmen episode 7 ahead**

But first, the twist: Angela’s husband, Cal, is Doctor Manhattan. Except he didn’t know it. The first sighting of the blue-hued demigod in the HBO series was during the pilot, with a news report indicating he was still on Mars after departing Earth in the final issue of Alan Moore’s Watchmen comics. We now know that isn’t true; Manhattan’s been masquerading as a human named Cal and doesn’t remember anything of his life before his ‘accident’ — not the one the led him to having super powers, but the incident 10 years ago that covered up his existence in Tulsa.

“Considering episode seven's ending, it would appear we have some explaining to do,” Lindelof told THR in typically understated fashion, before firing off a reassuring message to fans: “If I were watching the show, I'd be starting to panic that we can't possibly bring this all together in just two more episodes. So, uh… don't panic?”

As for the Manhattan reveal itself, Lindelof said it was always on the cards, even before casting Yahya Abdul-Mateen II as Cal – but only it featured Angela in a meaningful way.

“The new rule became that any legacy characters we were using (Veidt, Laurie and Hooded Justice) could only be used in service of Angela's story,” Lindelof said. “So how could Dr. Manhattan, a man with the power of God, be in service of Angela's story as opposed to the other way around? Based on his past (and all the tropes of Greco/Roman mythology), the answer was intuitive… love. We knew this relationship could only work if Manhattan took the form of a human, and so, the idea of Cal was born. And yeah, it came early. Almost from the jump.”

So, no Dan, but Manhattan is more than enough to power Watchmen through to the finish line. And did you notice Lindelof mentioning Veidt’s name in regards to Angela’s story? This Sunday is going to be an even more agonising wait than usual.

On the lookout for a new TV? Head on over to our Cyber Monday TV deals page, complete with major discounts on Sony, Samsung, and LG sets.