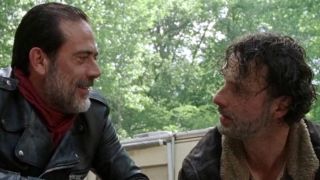 Obviously spoilers if you've not seen it yet, so get the hell out of here you fool!

It's not clear if this was an actual alternate killing being considered as there were rumours that deaths were filmed for every cast member to help prevent leaks. This could well be a distracto-death, which is a technical term for this sort of thing.

You can watch the clip below. It's definitely one of the worse options although I don't think there's any win to be had from that episode, no matter who got the bat.