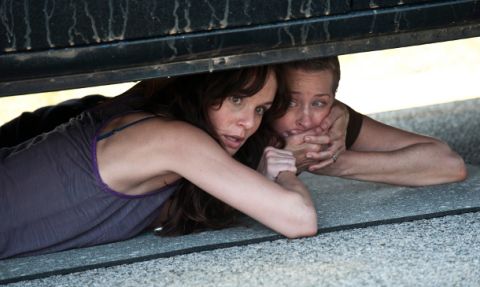 When there's a herd, you're better not seen

THE ONE WHERE Our heroes encounter a “herd” of zombies after the RV breaks down on the highway; then Carol’s daughter Sophia goes missing…

VERDICT It starts well enough: the sequences where our heroes play a deadly game of hide and seek with the zombie “herd” are utterly gripping. Unfortunately, after about 25 minutes, the episode really starts to drag. Long-time SFX readers may have read me ranting me about this before (apologies), but I’m sick to the back teeth of horror films (or TV episodes, for that matter), where people just wander around in the woods; it’s easy on the budget, but makes for dreary viewing. By the time we’ve sat through not one but two monologues-to-Jesus, the episode's become downright tedious. When someone pipes up, “This is the whole plan?”, you're tempted to cry, “This is the whole story?”

To be fair, maybe viewers who are parents will find the lost child subplot much more involving. And there are still some great moments: the gruesome kills; the surreal sight of zombie parishioners seated on church pews; the heated exchange between Andrea and Dale. It’s also interesting to see the issue of why only the guys get the guns addressed. By the looks of it, Andrea will hopefully soon be trained up and ready to step up to the plate as a fully-fledged zombie killer.

WHO THE HECK? “Ardeth Bey” is a pseudonym for Frank Darabont. The same name is used by the reanimated priest Imhotep (Boris Karloff) in Universal’s The Mummy (1932).

INFLUENCES The sequence where Rick and Daryl slice open a zombie’s stomach to see if it’s been snacking on Sophia is so reminiscent of Jaws that you half expect them to pull out a car licence plate.

NITPICKS Rick’s opening walkie-talkie monologue suggests that the last episode of season one took place “the day before last”. So how come there’s no sign of the nasty scratch on the face that Shane got from Lori? Can he heal like Wolverine? Why does Daryl seem to be the only person in the group who’s carrying a knife? You’d think everyone would be packing one by now. Finally, the corpse that Daryl pulls down on top of himself to hide from the walkers is very obviously a lightweight dummy.

BEST LINE Andrea: “I wanted to die my way, not torn apart by drooling freaks!”