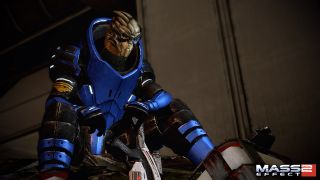 A remake of the original Mass Effect Trilogy is unlikely to happen, according to EA chief competition officer Peter Moore. It's a good thing Mass Effect fans are already used to working with conflicting information and goals, since executive vice president of EA Studios Patrick Soderlund said the company was "actively looking" at remastering the beloved sci-fi RPGs just weeks ago.

"We just feel like we want to go forward," Moore told IGN. "There's a little thing called Mass Effect: Andromeda that we're totally focused on at BioWare. And it's gonna be magnificent. [...] We want to focus on the future and delivering new IP and new experiences. There's easy money to be made all over this industry, but the real focus should be again on being player first, and focused on delivering against new IP and new experiences. And that's what our real focus is."

Moore added that fans are also clamoring for Skate 4, a new Fight Night, and even more Road Rash, but "there's an opportunity cost" for returning to all these existing concepts rather than creating new ones. Those are good points, but they do stand in direct opposition to what Soderlund said about the prospect of Mass Effect remasters. So it sounds like EA as a whole isn't quite sure what it wants to do yet.

Fans who are hoping to return to Shepard's adventures with updated visuals (and maybe a less janky Mako) can at least take heart in this: as the head of EA Studios, Soderlund is probably better informed about the goings on of Mass Effect and BioWare than Moore, who now leads the company's esports-focused EA Competitive Gaming Division. Hopefully EA locks it down one way or the other soon.