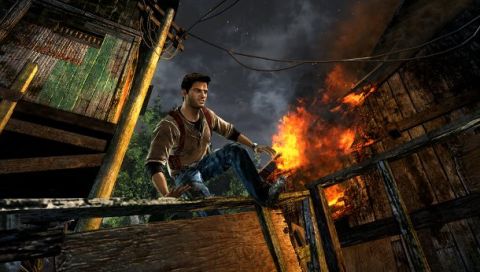 Golden Abyss showcases the power of Sony’s shiny new handheld the PS Vita beautifully by almost matching every feature found in the main PS3 Uncharted trilogy. Huge setpieces are fewer and farther between, but the decent-ish combat and excellent adventuring of the bigger versions are present and uncompromised.

Crucially, so too is the exemplary storytelling and acting.

So what holds it back? Launch title-itus: a rather crippling disease that typically infects the first wave of games found on any handheld console. Symptoms are simple: suffering games will end up shoehorning quirky mechanics into their running time that make use of the new handheld’s “unique” features, regardless of how poorly they’re suited to the game.

Uncharted boasts touch-screen navigation, gyro-tilt aiming, rear-touch-pad zooming, and camera-based puzzles. Some elements work nicely (holding a parchment up to a light bulb to read secret text is a notable example), others are plain fiddly. Some – we’re looking at you, gyro-aiming – can even be completely detrimental to your progress if, say, the PS Vita is so much as lightly jostled at the wrong moment. Piecing together torn-up letters with the touch-screen, meanwhile, is an okay-ish diversion, but not exactly something we’ve been aching to do in between treks through jungles and unearthed tombs.

Still, it’s a plucky attempted at Uncharted portability and you’ll really have never seen a handheld game like it before. Hopefully, we’ll see plenty faring better later on in the PS Vita’s life.