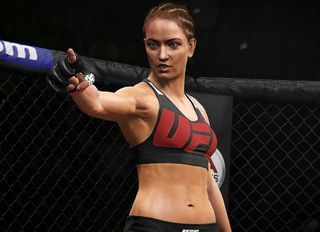 EA’s excellent support for UFC 2 shows no sign of wavering, with two more free fighters added as part of a title update which has just gone live.

Undefeated Polish bruiser Karolina Kowalkiewicz is added to the women’s strawweight division, with an impressive 90/100 stand-up rating, and an overall of 88/100.

The men’s featherweight division is also expanded to include Brazilian veteran Thiago Tavares, with an 87/100 overall rating, and particularly lethal choke and grappling attributes.

As with the game’s previous title updates, a suite of improvements and tweaks are also included. This time out many of them are for Ultimate Team: there’s a new item scouting system whereby you can spend coins to reset the list of available items each day, a smart ‘highlights of the week’ tab which shows the best items currently on offer, and fresh selection of collectibles called Fighter Showpieces, which promised ‘epic rewards’ when acquired.

Among the in-match changes are a bigger counter window after any denied clinch attempt, reduced Thai Knee damage, new momentum scenarios to ground positions and many more. A full list is available on the EA Sports website.