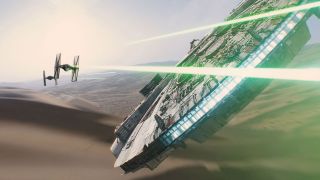 Picture the scene: you've just bought a brand new TV complete with a surround sound system that makes the local multiplex look like a flea pit, but what next? Showing it off to friends/family/random strangers is probably near the top of your list, but playing those blur-o-vision Game of Thrones DVDs ain't gonna cut it. You need a film that delivers maximum visual wallop, and the kind of sound that makes the windows rattle. But where to start? Theres no shortage of sensational looking Blu-rays, but demo worthy discs are few and far between. So here's our list of the top ten movie scenes for showing off your big screen pride and joy.

The scene: The star gate sequence

What's so good about it? Stanley Kubrick was a master visualist, a director who could find the beauty in everything from a racecourse to a snow-swept hotel, so its little surprise that his iconic trip to the stars is still influencing filmmakers today. 2001 is a film loaded with visually stunning moments from the match cut spanning four million years to the dazzling Discovery One interiors but the clear standout is the trippy star gate sequence in which Bowman is dragged through an awe-inspiring tunnel of light as haunting harmonised voices and strings play over the soundtrack. Its a visual effects sequence that hasn't aged a day, and still has the power to astound.

The scene: The night garden

What's so good about it? James Cameron and the wizards at WETA set the benchmark for computer generated effects five years ago with Avatar, and its looking increasingly likely that they'll only have themselves to top by the time Avatars 2, 3 and 4 come out. It may be remembered as the film that ushered in the 3D and performance capture revolutions, but for sheer lose-yourself-with-your-mouth-wide-open wow-factor few moments can beat the sequence where Jake and Neytiri spend some alone time in Pandora's lush bioluminescent forest by night. The utterly unreal flora and fauna achieve what so few films have done offering a window into a truly alien world. No wonder it made $2.8 billion.

The scene: Welcome to space

What's so good about it? The stunning, 17-minute, opening shot of Alfonso Cuarn's Gravity is so good that unbroken 2-3 minute chunks of it were used as trailers before release. But its not just that astonishingly long single take that makes it worthy of this list; the visual and aural impact of Gravity's opening is unlike anything that came before it. Its never less than photo-realistic, an unbelievable achievement given just how much of every frame is computer generated, from the tranquil documentary-like shots of earth, to the heart-stopping moment where everything goes horribly wrong for Clooney and co. Cuarn's acrobatic camerawork puts you in the moment like few other films have managed to the point that its nail-gnashingly tense. Coupled with Steven Price's oppressive score there are few better sequences for showing off what your telly can do.

The scene: The final lightsaber duel

What's so good about it? While you could pick almost any action sequence in The Force Awakens to show off your new TV, this one is the obvious choice. It's set in a snowy forest, so the glowing blue and red of the lighsabers really pop in the low light and predominantly white background. Their hum will test your subwoofer to the limit, and the sound of sabers scorching trees will make the kind of crackle that makes your hairs stand on end. Plus, it's a super-cool scene, so the kind of thing you'll enjoy watching again and again anyway.

What's so good about it? Blade Runner is a film of few words. So much so that Warner Bros felt the need to add a narration to the original version. But even without Deckard's deadpan voiceover (and the info-dumpy title card) everything you need to know about the films future LA is contained in the exquisite opening shot. The slow push forward over an industrialised twilight city scape, beacons visible for miles as flames erupt from colossal towers and a spinner flies overhead, was so influential that it practically invented the look of cyberpunk. Coupled with the gorgeous close up of an eye (the first hint that seeing isn't believing) and Vangelis iconic synthesiser soundtrack it creates the kind of atmosphere that can transform any living room into 2019 LA in minutes.

What's so good about it? It takes just over 90 seconds for Sheriff Ali to make arguably the greatest entrance in screen history in Lawrence Of Arabia, but it feels so much longer. To capture the image of a man emerging from a mirage Panavision created a special 482mm lens for the film, known among cinematographers as the David Lean lens. The utter silence of everything but the wind and stillness of the clear blue sky above the expansive sands gives the scene a hypnotic quality. Who is this man? What does he want? The possibilities are endless during those agonisingly long 90 seconds. A moment built for the biggest screen possible.

The scene: Rocking out

What's so good about it? Love it or hate it, there are some visually amazing moments in the new Ghostbusters. While the final sequence that sees the 'Busters battling Ghosts in central Manhattan is perhaps the most colourful, we've gone for the rock gig scene because it blends action, superb visual effects, and a rowdy soundtrack to great effect. The quiet moments before the actual concert scene will show off the range of your TV and sound system, before they're cranked up to 11 in the gig itself.

What's so good about it? No Bond film would be complete without a trip to some exotic locales, and Skyfall outshines all its predecessors. As shot by Roger Deakins, the entire film is visually dazzling the Macao casino, Silva's abandoned island but for sheer visual wallop its hard to top the Shanghai sequence. After a gorgeous aerial establishing shot of the city's night time skyscrapers Bond tracks down a sniper, who sets up shop across from a colossal LCD screen. The effect is surreal and undeniably gorgeous, as the super spy silhouettes fight against a background of whirling lights and jellyfish. Deep blacks are one of the hardest things for a home cinema release to get right, and nobody does it better than Skyfall.

What's so good about it? In just 15 minutes Steven Spielberg's WW2 classic changed the way war movies would be shot forever. From the incredibly immersive sound design (which has bullets whizzing past your head and explosions detonating somewhere near the bookcase in the corner) to the intense shaky cam, few films have done a better job of putting you in the moment. The washed out, grainy cinematography wont offer the kind of crystal clear clarity of more modern releases, but its still undeniably stunning, and a breathtakingly impactful depiction of unfathomable carnage. Maybe not one to show your nan, then.

The Lord Of The Rings: The Return Of The King

The scene: Lighting the beacons

What's so good about it? The Lord Of The Rings films are the best thing to have happened to New Zealand's tourism industry, and no scene better exemplifies the sheer magnificence of Middle-earth and its real life counterpart than the moment where Pippin lights the first emergency beacon during Gondor's hour of need in The Return Of The King. A series of aerial shots follow, each absolutely stunning with snow-covered mountains and peaks so high that they pop through the top of the clouds. The Blu-ray does show up the slightly fake looking fire, but Howard Shore's sublime score more than makes up for it a triumphant moment of wonder and awe.

What's so good about it? Pixar's adorable robot love story is arguably the studios best film. With a largely mute protagonist WALL-E relies on its visuals to tell its story, and it doesn't disappoint. The standout moment comes in deep space, after WALL-E returns the recently discovered organic life to EVE. In a moment of sheer euphoria the pair fly around the outside of the ship, EVE propelled by her internal engines which leave behind a green trail, WALL-E by a fire extinguisher which leaves floaty particles in his wake. It's utterly lovely, and a beautiful moment in animation history.
Find more Christmas articles on XmasRadar. Supported by LG.