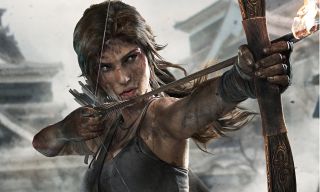 Walton Goggins, the newly confirmed villain for the Tomb Raider movie, was eager to share some of his excitement for the film, and in the process revealed a little bit more about what we should expect from the 2018 game adaptation. Goggins told Yahoo that "the story is so good. It's so good!"

"I think I can say this: For me, it's like Raiders of the Lost Ark meets a genre version of the Joseph Conrad novel Victory: An Island Tale," Goggins explained. "I just jumped at the chance."

If you're reading this story, you're probably familiar with Raiders of the Lost Ark, the first cinematic adventure of Indiana Jones. I've never read Victory myself (or Conrad's best-known work Heart of Darkness, sorry literature teachers) but Wikipedia has informed me that it takes place on a remote Indonesian island and sees its protagonist hunted by a trio of "desperadoes".

Lara Croft actress Alicia Vikander has confirmed that the movie will be based on the 2013 Tomb Raider game. And Victory's setting isn't too far off from the ancient Japanese island of the game. Goggins also added a little more context to his role as the bad guy.

"Is he a villain? Sure, that is an easy description," Goggins said, sounding exactly like a villain. "An antagonist, for sure. But [like other characters] I have been so lucky to have the opportunity to play over the course of my career, there are real reasons behind his antagonism, and it's not what you’d expect. He is very complicated, and his motivations are pure."

Directed by Roar Uthaug and starring Alicia Vikander and Walton Goggins, Tomb Raider will open in cinemas on March 16, 2018.