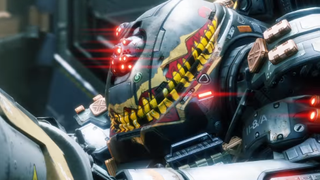 Titanfall 2 is due to hit store shelves on October 28, but we still don't know that much about its single-player campaign. Thankfully, a new behind-the-scenes video gives us another look at what this new feature (the original Titanfall was multiplayer-only) will be like, and it looks rad. Do people still say "rad"?

Personally, I think there are three big takeaways from this, and I've pulled them out (along with appropriate gifs of course) to review below. First up:

It's not all shooty-shooty bang-bang in the world of Titanfall 2. According to lead game designer Jason McCord, there will be moments where players will need to "stop and think about the environment and look around." We see this in action when a Pilot hops between giant fans, turning them off one at a time as he progresses through the gauntlet. Hopefully this will provide a nice change of pace and slow things down a bit, which will in turn give those big dramatic shootouts more impact.

A good giant robot story needs charismatic villains, and it looks like that's exactly what we'll be getting with Titanfall 2's bosses. It's hard to tell what distinguishes a boss from the rest of your enemies in this video, but I'm pretty sure the guy with the messy, half-buzzed haircut who screams about how "now we're talkin'" and has a Joker-like grin painted on his Titan is one of 'em. Bosses are a bit of a tricky thing to pull off in a first-person shooter, so I look forward to seeing how Respawn handles this concept.

There's been much lamentation over the modern design of first-person shooter games, so much so that the gaming community came up with the term "corridor shooter," as well as this famous image comparing old-school and modern map design. But it looks like Titanfall 2 will at least offer some branching pathways, as seen further on in the trailer, where a fork in the path leads two different directions. It's also a philosophy echoed by several members of the team, as they talk about "not caging the bird" and making the FPS genre "more adventurelike."

Of course, soon enough, we'll be able to see for ourselves how well these elements come together.