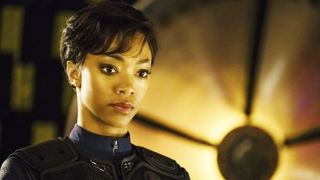 For the first time since 2002, Star Trek is boldly going where it’s gone, uhh, several times before: TV. Star Trek Discovery made its debut amid fanfare and lots and lots of Klingons, but what did the general public make of it?

It’s difficult to remember such a polarising set of opinions immediately following a beloved franchise’s return, but here we are – let’s set our phasers to stun(ned) and delve deep into the far reaches of a place no man has returned from un-scarred: the internet. If you want to check it out for yourself, download CBS All-Access (a paid service) in the US or fire up Netflix in the UK.

Psst... while there's plenty of opinions below, I've only included spoiler-free reactions. However, if you want to watch the premiere completely blind, I'd recommend coming back to this article after you've seen it.

@StarTrek @startrekcbs I don't want this first episode to end!"The only word to describe it is , wow!" @SonequaMG Makin' a great Number One!25 September 2017

I've only seen the first episode, but I was totally ENGAGED by the premiere of #StarTrekDiscovery. pic.twitter.com/UST1AHXPVG25 September 2017

This is not Star Trek. Opening titles are god awful, the uniforms!? Roddenberry would be saddened. #StarTrekDiscovery25 September 2017

Uhh wtf did I just watch? ..... This is not Star Trek. The ship,bridge, and whole setting is totally wrong. Star Trek Discovery is shit.25 September 2017

And the ugly (Klingons)

The Klingons from Star Trek Discovery look more like the aliens from Prometheus. Also: No moustaches? WTF?25 September 2017

Sonequa Martin-Green didn't recognize a Klingon? No problem... neither did ANYONE who knows Trek. #StarTrekDiscovery25 September 2017

Michelle Yeoh as the Captain and @SonequaMG as the Commander are fantastic. This scene gave me goosebumps. I'm hooked on @startrekcbs25 September 2017

@SonequaMG killing it on #StarTrekDiscovery This show is phenomenal.25 September 2017

Thank you. All of you. CBS, writers, producers, directors, crew and cast. For your gifts and… https://t.co/SmwLCVD8AX25 September 2017

Spock, did you know you had an adopted human sister named Michael?#StarTrekDiscovery pic.twitter.com/KahpAnnO2725 September 2017

The first ep of Discovery is good but "the adventures of Spock's adopted human sister" is surely the premise of one thousand fan fics right?25 September 2017