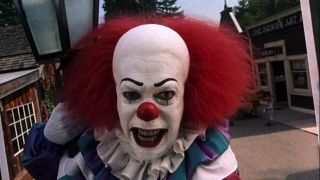 Cameras are rolling on the latest adaptation of Stephen King's It, a two-part movie that's destined to give a whole new generation of moviegoers an irrational fear of clowns and years of insomnia. Prepare to meet the thing responsible for those sleepless nights, as we've now got a first look at the latest incarnation of Pennywise:

That is one creepy clown. It's still a different take on Pennywise compared to Tim Curry's version from the '90s mini-series. That's probably down to the fact he's played by a much younger actor, Bill Skarsgard who calls Pennywise an "extreme character. Inhumane. It’s beyond even a sociopath, because he’s not even human. He’s not even a clown. I’m playing just one of the beings It creates.”

Fans of King's novel will know that Pennywise is one of many manifestations of an ancient evil dwelling below the town of Derry, Maine. The entity is referred to as 'It' by a bunch of youngsters (the Losers' Club) who take it upon themselves to fight the damn thing. That's the scope of the first movie, with the second film set to pick up when they're all grown up and return home to wipe It out for good.

Directed by Andres Muschietti and starring Bill Skarsgard and Owen Teague, the first It opens on September 8, 2017 in the US with a UK date yet to be confirmed. Plenty of time to buy a nightlight or two.